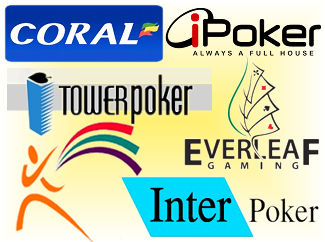 Tower Gaming, which operated a poker skin on the Revolution Gaming Network, has gone the way of the dodo. In a message posted to its website, Tower announced it had been purchased by Cake Poker and Malta-licensed Jetbull, with Cake assuming Tower’s poker players and Jetbull getting the rest. Tower switched from the Ongame Network to Revolution (then still known as the Cake network) in November 2011, but declined to accept any US players, essentially dooming it to also-ran status on the US-facing network.

The online poker arm of UK bookies Coral has received a coveted invitation to join the top tier of Playtech’s iPoker network. Coral moved its poker room from Amaya Gaming’s Ongame Network to iPoker in October, but only now has it met iPoker’s criteria for encouraging new signups and maintaining a sufficiently weighty monthly active player base. A Coral rep told PokerAffiliateSolutions.com that the company’s player base had “doubled in size” since the switch to iPoker. The new switch, which takes effect May 1, will see Coral join the likes of William Hill, Paddy Power, Titan Poker, Bet365 and Poker 770 in the rarefied air of iPoker 2.

Friday marked InterPoker’s first day as a member of Ongame. InterPoker announced its intentions to ditch the International Poker Network (IPN) aka Boss Media for Ongame earlier this month. InterPoker’s players will now enjoy significantly greater liquidity, but Danish players are still waiting on their local government to approve their joining the new platform, so for the moment, their game remains anything but on.

Malta’s Lotteries and Gaming Authority (LGA) has issued another statement regarding its licensee Everleaf Gaming. Everleaf pulled out of the US market in February 2012 after it claimed that US authorities had seized a sizable percentage of its operating funds. Though it claimed to be doing all it could to make its former US players whole, others have referred to Everleaf’s public statements on the subject as “not serious.” In February 2013, the LGA issued a statement saying that “a great majority” of Everleaf’s players had received payment, a claim that was almost immediately rubbished by other players as patently false. The LGA now says such complaints were made by “non-genuine players,” aka “affiliates disguising themselves as players.” The LGA claims that it is still “systematically contacting all players with genuine complaints to process their cases,” but since their investigation is ongoing, declined further comment.