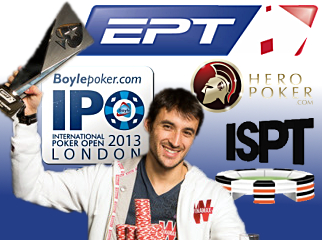 BOYLEPOKER ADDS EXTRA DAY 1
Sticking with London, the BoylePoker International Poker Open London has added an extra Day 1. The £200 + £25 buy-in will now have three starting days, the first of which kicks off April 17 at the Aspers Casino in Stratford. Online qualifiers got underway Friday at Boylepoker.com, with two weekly £22 qualifiers Thursdays and Sundays.

CHAN DOESN’T NEED A HERO
On Friday, pro player Terence Chan announced his Hero Poker sponsorship had run its course. A statement on Chan’s website said his decision to leave was “not in any way a reflection of how I feel about Hero Poker’s future.” In December, Hero CEO David Jung announced his poker site was leaving the Merge Gaming Network and transferring its players to another Merge skin while it contemplated its next move. Chan explained his departure by saying he has “a bit of a personal project … which will conflict with my ability to be a member of the Hero team.” Chan said he was confident Jung would “navigate his ship to prosperity” once the site returns to the interwebz.

ISPT: I SEE POKER TROUBLE
Sunday marks the first opportunity for American poker players to qualify online for the nutty International Stadiums Poker Tour (ISPT) via Lock Poker. The meager turnout for the first European ISPT online satellites didn’t exactly inspire confidence that the ISPT will live up to its ‘World’s Largest Poker Tournament’ tagline and the number of players who’ve registered for the first Lock qualifier doesn’t suggest any reversal of this trend. It probably didn’t help that Lock’s latest pro signing Michael ‘Grinder’ Mizrachi tweeted the wrong day for Lock’s first ISPT satellite. All in all, par for the course for the troubled ISPT, which we believe actually stands for Increasingly Suspect Poker Tournament.

In a conversation with the website of his Montreal-based alma mater Concordia University, Salsberg said his project was inspired by his observation that “a lot of kids in their 20s who have zero life skills all of a sudden win big poker tournaments and millions of dollars. They don’t know how to handle it. They get sponsorship offers and people come after them because they have money, yet they’re completely socially awkward and inept. They want to go out and meet girls but they’re not so skilled at that. It’s very high stakes; they can win or lose millions in a day. There’s just a lot of fun in that world.” Just please tell us there’s a role for Parker as a seducer of some young poker neophyte.