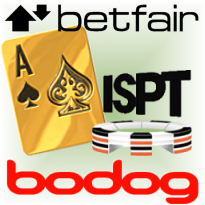 Laurent Tapie and Prosper Masquelier have inked poker pro Michael Mizrachi to help promote the International Stadiums Poker Tour (ISPT) inaugural event at Wembley Stadium in London next spring. Mizrachi, who became the first two-time winner of the $50k Poker Players Championship at this year’s World Series of Poker, announced via his Twitter account that he’d signed on as ‘official ambassador’ for the ISPT. There’s still a great amount of skepticism online as to whether the (possibly overly-) ambitious event will ultimately go off as planned, but let’s hope the ISPT’s checks don’t bounce, as Mizrachi isn’t shy about publicly voicing his displeasure with those who refuse to honor their financial commitments.

Elisabeth Hille, who earned $590k for her 11th place finish at this year’s WSOP main event, has inked a deal with Betfair Poker. Hille was already sporting a Betfair patch in the latter stages of her main event run, but WPT Magazine reported this week that the 26-year-old Norwegian amateur will join Peter Eastgate, John Tabatabai, Hans Martin Vogl and Jon Driscoll in flying the Team Betfair colors at future live poker events. Hille, who was a full-time waitress when she began her WSOP odyssey, will also act as official ambassador for Betfair’s Norwegian-facing site.

Apple may have shocked analysts by posting an earnings report in which profits didn’t beat the street, but Bodog Poker still has faith in the platform’s appeal, having just released a fully compatible Mac client. Bodog Poker’s Jonas Ödman said the Mac product “was always a ‘must have’ offering but to have it up within the first year of the software going live puts us well ahead of where we hoped we would be in terms of player reach at this stage. Now that the Mac client is ready we can concentrate on the first B2C marketing push of the Recreational Poker Model.”

Cake Poker’s Gold Cards aren’t worth the pixels they’re printed on, according to John Mehaffey aka @Pokerddictnet. The cards, which have been around since 2006, are randomly distributed to Cake players and were chiefly used as passes for exclusive daily satellite freerolls. But ever since the Cake Network’s assets were acquired by Lock Poker and rebranded Revolution Gaming, the Gold Card freerolls appear to have gone the way of the dodo. Despite this turn of events, the peer-to-peer Gold Card Exchange, in which players can trade cards of certain value for others, remains open, and Cake continues to take a 10% commission on the value of the cards exchanged.