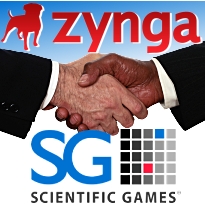 Social game developer and online poker hopeful Zynga made waves last month with its hiring of former 888.com exec Maytal Ginzburg, but more top execs continue to flee Zynga’s floundering ship. On Monday, Zynga announced that chief revenue and marketing officer Jeff Karp had handed in his notice and would be officially cutting the cord on Sept. 22 after providing “transition services.” The day before that, Gigaom.com reported that Zynga’s CTO of infrastructure Allan Leinwand had already flown the coop to take up a similar position at software outfit ServiceNow. There was a veritable stampede for the lifeboats in August, which saw the departures of chief creative officer Mike Verdu, COO John Schappert, vice-presidents Bill Mooney, Brian Birtwistle and Ya-Bing Chu, general manager Jeremy Strauser and a few others.

So what gives? Is everyone afraid to tell Zynga CEO Mark Pincus that his breath is terrible or what? National Alliance Securities analyst Mike Hickey told Reuters he didn’t think he’d seen anything quite like Zynga’s executive exodus, and he wasn’t convinced the recent announcement that the company was setting aside more stock for employee compensation would stem the tide. “When you have turnover with the stock already down, that suggests a sense of hopelessness within a portion of the employee base. If people were optimistic about future growth, and their compensation is tied to new, lower priced equity, generally they don’t leave.”

Zynga got a more positive analysis from Facebook founder Mark Zuckerberg, who made a rare appearance at the TechCrunch Disrupt conference in San Francisco on Tuesday. When he wasn’t bemoaning the time Facebook had wasted on developing HTML 5 apps instead of going native, Zuckerberg threw Zynga a bone, saying that while Zynga “had a rough few quarters, they’re basically a strong company. Other companies, like King.com and Kixeye, have gained share. We have 200m people playing games monthly. That’s real.” Zuckerberg’s pep talk may have boosted more than Zynga employees’ morale. Zynga shares had dropped 1% on Tuesday, but were up almost 3% in after-hours trading.

Or perhaps people are reacting to the news that Zynga has taken another step towards real money gambling… of a sort. On Tuesday, PokerFuse reported that lottery outfit Scientific Games has partnered with Zynga to offer instant lottery tickets via Zynga games. The three-year deal was announced this weekend at the World Lottery Summit in Montreal. The deal is a no-brainer for Scientific Games’ chief creative officer Steven M. Saferin, who cited it as a way for lotteries to reach a younger demographic, a category of players with whom most lotteries have had great difficulty connecting. While Scientific Games has applied for a Nevada online poker service provider license, Saferin denied the tie-up had any online poker implications.