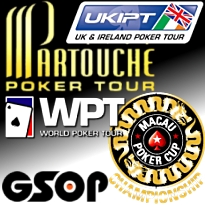 German poker player Ole Schemion will go into the history books as the latest – and last – winner of a Partouche Poker Tour main event. Schemion earned €1.17m for outlasting 572 other players over five days in Cannes at the season five finale that contained as much drama off the felt as on. In case you missed it, the player pool failed to match the advertised €5m guarantee, which the PPT organizers then claimed had never existed, until the internet’s Scooby Doo gang produced reams of evidence that it did exist, which prompted an indignant PPT owner Patrick Partouche to announce he was killing off his tournament to spite, er, someone. Anyway, the PPT eventually met the overlay, which was almost as much as Karen Sarkisyan earned (€693k) for finishing second. The rest of Sunday’s top-six finished as follows: Aaron Lim (€411k), Dan O’Brien (€336k), Marcello Marigliano (€263k) and Fabrice Touli (€220k).

Sticking in Europe, Nikos Grammis has won the Grand Series of Poker (GSOP) Live stop at the Portomaso Casino in Malta. Grammis earned €69k for the victory, while runner-up Michal Polchloopek earned €44k and Aku Joentausta earned €31k for finishing third. Over in the UK, Christopher Ferguson (the Scots one, not the Jesus one) has earned £87k for winning the UK & Ireland Poker Tour (UKIPT) Newcastle main event, which attracted 623 players to the Aspers Newcastle Casino. Alexander Jobling earned £82k in second place after striking a heads-up deal with Ferguson, and 2011 WSOP November Niner Sam Holden earned £39k for finishing third. And the World Poker Tour Grand Prix de Paris main event Day 1a is in the books. The €7,500 buy-in tourney’s first day attracted 96 players, of which 51 survived to progress to Day 2.

Across the pond in Atlantic City, the organizers of the 10th annual Borgata Poker Open claim that the 3,705 players who ponied up the opening event’s $500 buy-in was twice that of the previous year and set an east coast record for the largest single-event turnout. Ben Bianco claimed $310k of the $1.85m prize pool for defeating heads-up opponent Dan Wach, who settled for just under $201k. The $3,300 WPT Borgata Poker Open Championship gets underway Sunday, Sept. 16.

On the other side of the world, Australian David Steicke won the opening event of the 2012 Macau Poker Cup Championship (MPCC), earning HK$306k ($39.4k) for outlasting his 160 opponents. The Czech Republic’s Roman Babeka was last to fall at Steicke’s hands, earning HK$206k for his troubles. The MPCC runs until Sunday, with the HK$20k main event kicking off on Wednesday. A little further afield, Olivier Baux has won the Crown Poker main event in Melbourne, Australia. Baux outlasted 460 opponents – including heads-up opponent John Mouawad – over four days of play to earn the title and just under $102k. Mouawad earned just under $62k for finishing second.