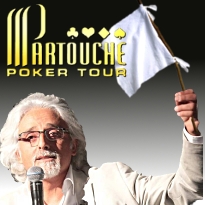 Suffice it to say, no reputable business school has plans to include the Partouche Poker Tour’s past 48 hours in any case study of how best to approach crisis management. After the PPT fifth season’s marquee event in Cannes failed to attract enough players to measure up to its €5m guaranteed prize pool, PPT officials initially denied there had ever been such a guarantee, only to have an army of poker players track down and circulate indisputable audio-visual evidence of various PPT bigwigs explicitly stating the existence of said guarantee (as well as evidence that the PPT appeared to be scrubbing the interwebz of this incriminating material). Having painted himself into a corner, CEO Patrick Partouche proceeded to publicly castigate players for having the cheek to suggest he was trying to pull a fast one, after which Partouche announced the PPT would cease to be following the conclusion of the Cannes event.

But Partouche’s petulant decision to take his ball and go home didn’t do anything to remedy the potential breach of contract created by the PPT’s failure to live up to its guarantee, and so, after a good night’s sleep and (presumably) a reality check from his attorneys, Partouche announced on Friday that the PPT would “bear the consequences” and make up the €737k prize pool shortfall. But Partouche, perhaps seeking to avoid being labeled a cheese-eating-surrender-monkey in certain Yankee circles, remained defiant to the end, insisting that the only guarantee in the “official rules” was €500k for the Cannes main event winner. Partouche went on to blame “external media” for “spreading confusion and erroneous information.” Partouche also confirmed that he hadn’t rethought his decision to kill off the PPT, saying he “cannot go back on my word.” Except, you know, this time.

No word yet on whether the latest crop of ambassadors for the International Stadiums Poker Tour (ISPT) – the online/live mega-tournament for which Groupe Partouche is producing the live segment – are rethinking their involvement based on this week’s shenanigans. Following the lead of Michael Mizrachi and Sam Trickett, Patrik Antonius and Liz Lieu have both signed on to pimp the ISPT’s inaugural event at London’s Wembley Stadium that gets underway May 31, 2013. Vietnamese-born Lieu was officially announced as an ISPT ambassador earlier this week, and Antonius was spotted wearing an ISPT patch at the PPT Cannes event. While the ISPT hasn’t stated whether Antonius’ involvement extends beyond the PPT patching, it has circulated a photo of Antonius with Lieu and ISPT CEO Prosper Masquelier, which at least implies the two players have signed on for similar functions. No doubt this lack of clarity is the ISPT’s way of avoiding accusations of spreading confusion and erroneous information.