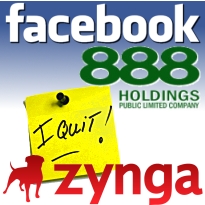 Confirming rumors that first surfaced last November, 888 Holdings CEO Brian Mattingley has admitted his group is having “discussions” with social network Facebook regarding a potential real-money online gambling tie-up. However, as Mattingley told eGamingReview, while Facebook recently got itself a little bit pregnant by allowing Gamesys to launch the real-money Bingo and Slots Friendzy social game in the UK, it’s far from certain whether Facebook has finished assessing the fallout. “Whether the overall strategy of Facebook is to develop real money gaming remains to be seen. I think they are yet to decide, although Gamesys has been successful and I don’t see any reason why other operators shouldn’t be successful.” In the meantime, Mattingley says talks with Zuckerberg’s minions are “ongoing.” While Wednesday saw 888’s shares rise 6% on the strength of its boffo H1 numbers, Facebook fell 24 cents (1.24%) to close at $19.10.

Social game outfit Zynga has made no secret of its gambling ambitions, promising to start converting Zynga Poker players from free-play to real-money by 2013. Last October, Zynga had already tipped its hand by registering 150-odd gambling-related domains through internet brand protection company MarkMonitor. On Tuesday, Fusible reported that someone had used MarkMonitor to register the domain Zyngambler.com. The domain was originally registered in 2011, but the original owner let it expire and someone else scooped it up this week. If you visited the site on Tuesday, you’d have seen a Zynga Poker banner at the top of the page and some generic placeholder material below it, but the page has since been password protected, rendering it invisible to prying eyes. Fusible has been unable to get Zynga to confirm or deny ownership of the domain.

There is some verifiable Zynga news, in that chief creative director Mike Verdu has become the latest top exec to announce he’s leaving the company, effective immediately. A three-year Zynga veteran, Verdu told AllThingD that he was leaving on good terms to start his own game outfit, in which Zynga would be an investor. Verdu admitted the timing was suspect, but insisted his decision to jump ship had nothing to do with the ship being 70% underwater. “I’m concerned aout how this might be viewed with what else is going on, but it’s not a function of anything else going on at the company.” Verdu’s announcement has prompted no shortage of jokes regarding the notoriously copycat nature of Zynga’s game titles, which have been the subject of more than one copyright infringement suit (including one by Verdu’s former employer, EA). “So what do you do at Zynga?” “I’m creative director.” “Right, and I’m the Republican National Committee’s official abortionist.” Zynga investors failed to see the humor, sending the gaming company’s shares down nearly 4% on Wednesday to close at $2.95.