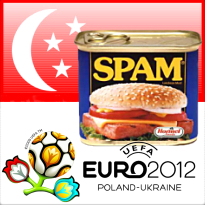 As the clock counts down to Euro 2012, Singaporeans are receiving unsolicited come-ons from local online sportsbooks via their mobile phones. The first pitches – sent via the WhatsApp messaging service – appeared on Singaporeans’ mobiles this Wednesday. The sender asks for a S50 (US $39) deposit to a local bank account in exchange for access to an online football betting website. They’re even running a 20% deposit bonus! Authorities are reminding people that it’s illegal to bet on Euro 2012 with any other bookie than Singapore Pools, but as an unnamed insider reminded the Straits Times, the local bookies prefer less obvious methods of acquiring customers, suggesting the spammer was most likely a scammer: “I doubt any bookies will take this sort of risk.” Unauthorized bookies in Singapore are subject to fines of up to S200k and five-year maximum jail terms, while those who merely place wagers face fines of S5k and six months in the pokey – probably twice that if they’re chewing gum when arrested.

Another 15k Singapore residents have been barred from entering Singapore’s two resort casinos. The Ministry of Community, Youth and Sports acknowledged that the number of low-income gamblers remained “small,” but chose to “move proactively to address” any increase in that number. Starting July 1, 12k low-income ComCare financial aid recipients and 3k subsidized housing recipients who are six months behind in their rent will be persona non grata on the casino premises.

Also not welcome back anytime soon is Melviana Johnson Fu, a thirty-year-old Malaysian woman sentenced this week to 10 months in prison for robbing men she met at Resorts World Sentosa. On the three separate instances for which she was charged, Mad Mel befriended a male gambler on the casino floor, which led to dinner, finishing up back at his hotel room or apartment. Then came the buyer’s remorse. One man discovered his wallet was missing S22k. Another poor sod came out of the shower to find not only his wallet gone but his trousers as well. Cruel, we know, but we like to think the third let himself be handcuffed to the bed like George Costanza in Seinfeld. We also like to think the authorities remembered to uncuff him, otherwise he’d have turned into that guy handcuffed to the bed in the movie Se7en.