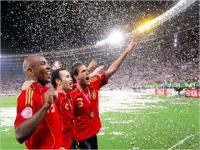 Europe’s best soccer teams descend on Poland and Ukraine this week when the Euro 2012 tournament gets underway with Poland vs Greece on Friday evening. You get the feeling this tournament will go to one of three – Spain, Holland or Germany – or go the way of 2004 and present us with a huge surprise. To help our non soccer-enamored readers understand all of it a bit more we’ve decide to put together a Power Ranking that will be updated after each round of games. To start it off is our pre-tournament list. If you disagree feel free to use the comments box at the foot of the page…

The reigning world and European champions are the obvious favorite to become the first team to win three international trophies on the trot. An injury to David Villa and the long domestic season could hamper chances.

The squad is pretty much the same to the World Cup runner up team and they now have two of the most prolific strikers in Europe – Klaas Jan Huntelaar and Robin van Persie – scoring freely.

Mesut Ozil is widely tipped to be the player to watch and tournament football is where the Germans excel. Fatigue and a tricky group stage will be the only things that stunt them.

Being dubbed as a dark horse by some they’re likely to reach the quarter’s without much trouble. Going forward they can be devastating if Samir Nasri, Karim Benzema and Franck Ribery combine. The group will be the easy part.

Roy Hodgson’s men are considered by many a dark horse and it’s a position England aren’t used to. The amount of injuries could be the death knell to any chances but if they’re still in it when Rooney’s back anything could happen.

Have the easiest group and are in a familiar area geographically. Goals may be hard to come by if Andrey Arshavin and Alexander Kerzhakov fail to link up.

Host nation and given the ease of the group are likely to go through. A lot is expected of Dortmund striker Robert Lewandowski.

Another match fixing scandal has threatened to disrupt their preparations and results in the build up have been poor.

Slaven Bilic’s side are usually a threat at this tournament and are another that could surprise some with Nikica Jelavic coming in on a rich vein of form.

Any side that has Cristiano Ronaldo shouldn’t be this low but they’re another that have had a bad build up to the tournament. Also the small matter of being in a group that contains Germany and the Netherlands.

The hosts have been hit by a bout of food poisoning ahead of their first game. Overcoming France or England to qualify will be tricky.

It’s all on one man’s shoulders. If Zlatan decides to turn up they could be the biggest dark horse of them all. If not they’ll bow out quietly.

Coached by a wily Italian mean that letting in goals won’t be something the Irish will be doing. The other end is where they will struggle. Outside bet for the quarter finals at best.

Being in the weakest group means they have a chance and Milan Baros does love a European Championship Golden Boot prize. Sadly the supporting cast aren’t what they once were and truth be told nor is Milan.

Placed in the group of death means they’re lower than they probably should be. They’ll be lucky to get more than a couple of points.

It was hard to hand out the wooden spoon and the result eight years ago would suggest that writing off Greece isn’t wise. They simply aren’t that good though.