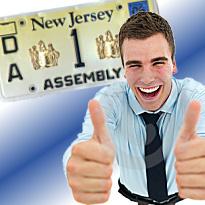 New Jersey’s latest online gambling bill moved another step closer to reality on Thursday, with the Assembly version (AB2578) passing a committee vote by a margin of three (in favor) to one (opposed) to one (abstention). The bill would permit New Jersey residents to enjoy online gambling (poker plus table and casino games), with a provision for out of state residents to join the party, provided the federal government doesn’t respond by calling out the National Guard. The state Senate passed its own version of the legislation (S1565) in April, but neither legislative body has as yet scheduled a floor vote on their respective bills.

To alleviate constitutional concerns, both versions of the online gambling legislation would require online gambling servers to be located in Atlantic City, but the two bills differ greatly on the tax rate that will be applied. AC casinos currently pay 8% tax on gaming revenues, plus 1.25% to AC’s Casino Reinvestment Development Authority (CRDA). The Senate bill would impose a 10% tax on online gaming revenues, while the Assembly version is much harsher – 20% of revenues plus 5% to the CRDA. Sen. Ray Lesniak, one of NJ’s chief boosters of online gambling, warned the committee that too high a tax rate could make it difficult to form interstate compacts with states that imposed lesser tax burdens on their licensees.

A number of other stakeholders appeared before the Assembly committee to voice their support/concerns. The Casino Association of New Jersey’s Robert Griffin backed the bill, while state horseracing lobbyist A.J. Sabbath was agin’ it because he claims it would unfairly compete with online horse betting. Similarly, the lone ‘no’ vote on the committee came from Assemblyman Ralph Caputo, who voiced his displeasure that the legislation would preclude state racetracks from joining in the online gambling fun.

OH, RIGHT… IT’S AN ELECTION YEAR
Assuming both state bodies can resolve and pass their respective legislation before their summer break begins in July, the question switches to whether or not Gov. Chris Christie will sign it into law. Legislators have extensively revamped their bills to remove the offending bits that caused Christie to veto similar legislation last year, but Lesniak made headlines earlier this week when he suggested the Republican governor was waffling on the online gambling issue over concerns that Las Vegas Sands chairman Sheldon Adelson – a staunch opponent of online gambling and a major GOP backer – might retaliate by keeping his wallet in his pocket during the US federal election campaign.

Lesniak’s Christie comments were rubbished by iMEGA boss Joe Brennan Jr., who tweeted that they were “untrue & not supported by anything the Gov or his people have said.” But Lesniak has doubled down on his beliefs, telling PokerNews that Christie “certainly is wavering in his support and it is my belief that it is because of presidential politics.” Christie may also be keeping his options open in case GOP presidential candidate Mitt Romney taps the NJ guv as his running mate. In February, Romney told the Las Vegas Sun’s Jon Ralston he was opposed to online gambling. “I don’t want to increase access to gaming. I feel that we have plenty of access to gaming right now through the various casinos and establishments that exist.”

Romney would prefer to spend his summer attacking President Barack Obama on economic matters, but Obama’s “I support gay marriage” media bombshell on Wednesday suggests the 2012 campaign may (once again) be fought over social wedge issues – a category under which online gambling presumably falls. Watch this space…