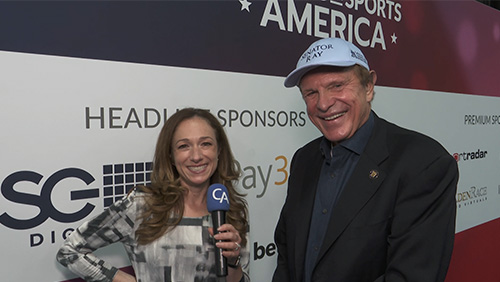 On May 14, 2018, the U.S. Supreme Court lifted the federal ban on sports betting. This allowed states to choose for themselves if they wanted to legalize gambling within their state, with New Jersey becoming one of the first to do so. Former New Jersey State Senator Ray Lesniak was one of the individuals who pushed this all the way to the highest court in the land, and he recently sat down to talk with CalvinAyre.com’s Becky Liggero to discuss helping to legalize sports gambling across the country.

In the interview, Lesniak explained that it was the legal calamity that a friend was in that got him involved in this fight in the first place. His friend, Rudy Garcia, had been arrest and charged with racketeering, money laundering, and conspiracy. Lesniak was upset about this turn of events, realizing that “he could have gotten on a plane and gone to Las Vegas and done it legally.”

It was at that point that he decided to take action. Lesniak explained that with five casinos closing in Atlantic City, 15,000 jobs were lost and the racetrack industry was dying. He figured that legalized sports gambling was the solution and, despite a number of people telling him there was no way he could win, he opted “to go after it and we ultimately won our victory.”

Compounding the problem for Lesniak was that he saw how Las Vegas was thriving because they were able to offer sports wagers. “I said so many times what annoyed me a lot was during Super Bowl week in the NFL season and during the NCAA Tournament, Las Vegas you couldn’t get a room. Atlantic City was a ghost town. Now you can’t get a room in Atlantic City.”

It was at that point that he opted to fight to make it legal in his state for people to bet on sports. Lesniak explained to Liggero that the solution to revitalizing Atlantic City was an easy one, yet one he was going to have to fight to make a reality.

“These are two industries (racetracks and casinos) that needed an infusion of new life, new blood, new revenue, and sports betting was the answer. I started 12 years ago, eight times in court but finally, we won and we’re enjoying the benefits.”

The former state senator explained to Liggero that allowing this kind of business helps the community in many ways. While people are placing bets, they will “stay for dinner. They’ll rent rooms. It brought an entire town back to life again, and that was my goal.”

Speaking at the Betting on Sports America conference, Lesniak has seen the reality of hard work and persistence. Atlantic City is thriving once again and now 11 states offer sports wagers thanks, in part, to the efforts of Ray Lesniak.