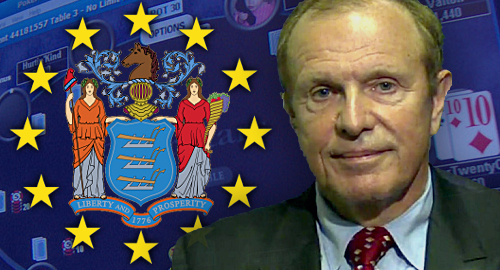 New Jersey is making a second run at convincing international online gambling operators to share liquidity with their counterparts in the Garden State.

S3536 claims that “the largest share of online gambling revenue comes from Europe,” which is “growing at a faster rate than the rest of the world.” As such, permitting select online servers to be located outside Atlantic City “if necessary to facilitate the conduct of international wagering, would increase the economic benefit of Internet gaming to Atlantic City and to this State.”

Lesniak originally vowed to introduce his bill this summer, after New Jersey Division of Gaming Enforcement director David Rebuck admitted that the server location requirement had proved the main sticking point in deterring international operators from taking the proposal seriously.

Lesniak announced his retirement from the state senate earlier this year in order to make a (sadly failed) run at being elected governor. Which means Lesniak’s bill needs to pass before he rides off into the political sunset on January 9, 2018.

Of course, the irony of a US state accepting international gambling customers is off the scale, given the US federal government’s willingness to punish internationally licensed gambling sites who dare to accept US customers, a stance that the World Trade Organization has ruled runs contrary to international trade obligations. But we digress…

While New Jersey’s regulated online gambling market has flourished this year, the online poker vertical – which would be the primary beneficiary of international liquidity sharing – has failed to keep pace. The state has been trying to give the lagging vertical a boost, including belatedly joining the interstate liquidity pact already in place with the two other active intrastate gambling jurisdictions, Delaware and Nevada.

Lesniak is a longtime advocate for the state’s gaming industry, and was a prime mover in New Jersey’s push to overturn the federal prohibition on sports betting outside Nevada, a goal that looks tantalizingly close following Monday’s hearing at the US Supreme Court.

Following the hearing, Lesniak told the Associated Press that he expected either a 7-2 or 6-3 ruling in New Jersey’s favor. Lesniak said the likelihood of the state prevailing was “not quite a slam dunk, but it’s about Tiger Woods and a five-foot putt.”