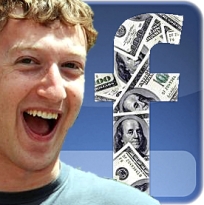 On Thursday, after months of anticipation, speculation and rumors of stage fright, Facebook filed for its initial public offering (IPO) with the Securities and Exchange Commission. The social media colossus has decided to price some 337.4m shares at a wallet-busting $28 to $35 apiece. At these prices, Bloomberg says the IPO could raise $11.8b, while private company analysts PrivCo say $13.6b.

Either way, it would be a record haul for an internet company IPO but the high end of that scale would make this the fourth highest overall IPO in US history. The IPO puts a value on Facebook of around $90b, below the previous $100b estimates, but analysts expect the share price to rise as we draw closer to ‘investor Christmas’. Speaking of, shares labeled “FB” could be trading on the Nasdaq by May 17 or 18 – three or four days after Facebook founder/CEO/largest shareholder Mark Zuckerberg turns a mere 28 years old. Truly, God must be a closet nerd.

Before the magical moment arrives, the company is hitting the highway to take its “we’re worth every penny” roadshow to investors across the USA. The production – featuring Zuckerberg, COO Sheryl Sandberg, CFO David Ebersman and some salivating Wall Street investment bankers – could open as early as Monday. (Facebook has already posted a preview video.) When it comes time for Q&A, likely topics will include why Facebook is worth 99 times its earnings (which are just 10% of Google’s), why its profits just took a plunge and why it still has no proven strategy for mobile advertising.

Other investors might express concern at the 57% of Facebook’s voting power Zuckerberg will retain even after selling 30.2m shares from his 533.8m personal stash. (The billion or so this will raise is reportedly earmarked to pay Zuckerberg’s taxes.) With great power comes great responsibility, but was paying $1b for Instagram – a deal Zuckerberg reportedly worked out on his own – a responsible decision? Time will tell. However, if the roadshow runs long and/or the questions get too tough, a FB plant in the audience will yell out: boxers or briefs? Everyone will laugh, Zuckerberg will yell ‘peace out’ then saunter off stage – the cue for agents of Goldman Sachs, Morgan Stanley and JPMorgan to flood the crowd, iPads in hand, ready to take your order. Ain’t capitalism grand?

How you can keep your friends and family close online
Derek Tonin
18 December 2020
.