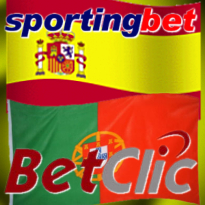 With Sportingbet having made the last installment on its $33m settlement with the US Department of Justice, the company is now talking more openly about its plans to re-enter the US market if/when regulations permit. Bolstering rumors that first surfaced in October, the Evening Standard reports that Sportingbet is in “advanced discussions” with Connecticut’s Foxwoods Resort Casino on an online poker joint venture (although it’s unclear where this leaves Foxwoods’ previous JV with Goodson Gaming). Earlier this month, Sportingbet CEO Andrew McIver told our own Rebecca Liggero that discussions with a US-based JV were “at the paperwork stage.”

Across the pond, Sportingbet has announced it will challenge the injunction brought against the company’s Spanish-facing operations by local gaming operator Codere. Late last year, Codere filed for injunctions against multiple online gambling operators, alleging the sites had been operating without authorization prior to the state issuing a call for license applications, which gave them an unfair competitive advantage over companies only now getting their online feet wet. While Codere’s efforts mostly came to nothing, the Commercial Court in Madrid granted an injunction against Sportingbet’s Spanish-facing sites Miapuesta.com and Miapuesta.es. Sportingbet argued against the injunction, but to no avail, and the ban was to take effect March 27.

Sportingbet released a statement on Tuesday saying that following consultations with its lawyers, the company “firmly believes that Codere’s injunction application was based on erroneous information presented to the court and is a blatant attempt to disrupt the market in the run up to the issue of licenses.” Sportingbet spokesman George Hudson subsequently told Reuters that Codere “has an axe to grind about supposed unfair competition, which is blatantly wrong and misleading.” Sportingbet has already applied for a Spanish gaming license, which the company expects to be awarded by May 25.

Next door in Portugal, Betclic is the latest company to feel the wrath of local betting and lottery monopoly Santa Casa de Misericordia de Lisboa. As Portugal moves toward opening up its online gambling market, Santa Casa has been increasingly aggressive against rival companies. Santa Casa has now convinced Lisbon’s civil court to prohibit Betclic from advertising its Malta-based online sites in Portugal, which spells doom for Betclic’s sponsorship of Portuguese football clubs. Economia Publica reports that Betclic was also ordered to pay €50k for each breach of the country’s online gaming laws and the country’s telecom guardians have been ordered to block Portuguese punters from accessing Betclic’s sites. Betclic has a month to decide whether to appeal the decision.

In rejecting Betclic’s defense, the court noted that these same issues had already been decided at the European Court of Justice in 2009 in Santa Casa’s fight with Austrian betting outfit Bwin. In that case, Bwin was ordered to cease its Portuguese operations and curtail its sponsorship of football clubs, although Bwin continues to hold out hope that the ruling will be overturned on appeal. On a bright note for Betclic, the Lisbon court denied Santa Casa’s demand that Betclic pay its court costs, noting that Santa Casa had failed to conclusively establish a link between Betclic’s business and Santa Casa’s alleged lack thereof. Santa Casa is demanding Bwin pay €27m damages on similar grounds.