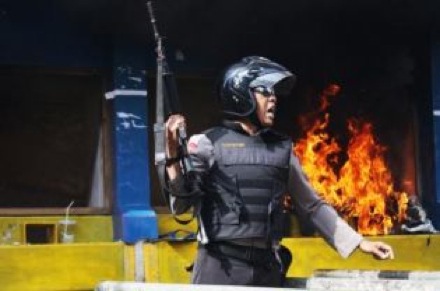 Indonesian authorities had a rude awakening this past weekend after fans trying to buy tickets went one better than expressing their discontent with rude chanting. Tickets selling out meant the tense atmosphere heating up so much that supporters started to throw…shoes. Before long, it escalated into what sounded like riotous conditions, offensive chanting being the least of their worries.

Getting to the front of the queue pissed them off so much they decided setting fire to the relevant tickets booths was the only way to get their point across. It ended with two fans arrested for the violence near Jakarta’s Bing Karno stadium. Fans were hoping to garner tickets for tonight’s clash with Malaysia that were on offer for Rp 25,000 and Rp 50,000 ($2.75 to $5.50). Next time, we’ve got a tip – just go to the scalper and get a ticket from them. Might prevent you getting locked up or receiving serious burns.

In a similar part of the world, a betting scandal affecting Australian rugby league has taken another turn. Key witness, Brad Murray, told a courthouse that he lied about the actions of his manager at the time Sam Ayoub. He reasoned that he was under pressure from his club, Parramatta, and concerned that by telling the truth it would wreck his career.

The five-day hearing came about after a spot betting scandal was uncovered over a year ago. Ryan Tandy, then of the Canterbury Bulldogs, was accused of deliberately fumbling a ball right under the posts early in the game so that opponents, North Queensland Cowboys, would score a penalty. It’s alleged that former-player John Elias was in on the scam and placed bets on the Cowboys to score the first points of the game. Murray was reportedly asked to place bets for Ayoub and his former manager is accused of telling Elias to put money on the Cowboys scoring the first points. It has been reported that this betting only usually sees around 9.1% of bets whereas in this instance in attracted 97.1% of wagers. The case gives credence to those that argue these “exotic bets” will increase corruption in sports and should be completely banned. As has been seen in the past driving something underground will only make it worse and that could easily happen here.