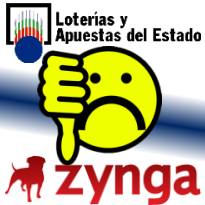 Spain has put the brakes on plans to partially privatize its national lottery, just five days after the government had formally signed off on the move. The initial public offering, which would have been the biggest in Spain’s history, was announced in April and scheduled for October, but recent turbulence in the stock markets has caused a rethink. The finance ministry tasked with overseeing the deal claims “conditions are not right to guarantee an income that reflects the value of the lottery … the operation can be taken up again when market circumstances make it advisable.”

Politics may have also played a role. The country goes to the polls on Nov. 20, and the ruling Socialist party is expected to lose to the Popular Party, who have won fans by objecting to the scope and speed of the Socialist’s privatization agenda. The Loterias y Apuestas del Estado is responsible for what is probably the most famous lottery in the world, El Gordo (the Fat One). The sale of up to 30% of the lottery was expected to raise as much as €7.5b for the cash-strapped state.

‘Market conditions’ may also have tossed a wrench into social games developer Zynga’s much-ballyhooed plans to go public. Zynga turned heads earlier this week when it released figures showing net income of $1.4m for the quarter ending in June, a 90% drop year over year. In the same period, the number of daily active users dropped from 62m to 59m, and bookings (virtual goods sales + ad revenue) were off 4%, the first time in Zynga’s history that figure has failed to grow.

However, a closer look suggests Zynga’s financials, while troubling, aren’t nearly as dire as the media claim. Total revenues were up 15% from the previous quarter, less than the previous quarter’s 24% growth, but still moving in the right direction. Operating income for the quarter was $13m, compared to $13.4m the previous year. So income is flat, but hasn’t yet fallen off a cliff. The calamitous plunge in net income that garnered all the headlines is blamed on higher R&D and general and administrative costs, the slow pace of new games introduction, new competition from Google+ Games, not to mention the 30% cut Zynga is now compelled to give Facebook for the ‘privilege’ of using its Credits payment system. Zynga will eventually make it to the IPO starting line. But if it fails to explode out the gate for the double-digit billions analysts were projecting just a few months ago, will it have ‘market conditions’ or itself to blame?

Fifth-largest lottery pot in the US up for grabs with Mega Millions
Erik Gibbs
14 January 2021
.