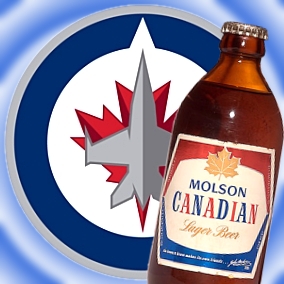 It’s the middle of summer, so what better time to bring you a roundup of hockey stories? Sure, right now you’re thinking ‘puck off,’ but with the possibility of an NFL- and NBA-free 2011-12, you hockey haters will come crawling back in due course. Anyway…

The resuscitated Winnipeg Jets franchise has unveiled the new team logos. Apparently, the main circular logo was inspired by the Royal Canadian Air Force emblem (the city does have several full-sized vintage military jets up on pedestals scattered throughout its streets), while the secondary logos were inspired by the desire to sell even more merchandise. (Collect ‘em all!) Naturally, there’s a predictable contingent of diehard fans who are outraged that CPR wasn’t performed on the old 1970’s logo, but hey — new century, new logo. Just be thankful you’ve once again got something to fill the void on those -40° January nights.

Molson Breweries has been awarded the official beer sponsorship of the National Hockey League, a deal worth $375m over the next seven years. (For comparison purposes, it cost Anheuser-Busch $1.2b over six years to get the NFL beer rights.) Molson rep Adam Moffat sobered up long enough to brag that the deal was “a great springboard when we start to look at how we expand and grow that brand south of the border.”

To understand the importance of the Molson deal north of that border, you only have to read the Ontario Superior Court affidavit filed by rival brewer Labatt (the previous NHL beer barons) as part of their attempt to block Molson from stealing their thunder. “The NHL and the access it provides to Labatt … is the single greatest opportunity to grow Labatt’s share in Canada … There is no other substitute for this national access to these consumers. The nexus of sports/heritage/emotional/tradition in hockey has no other Canadian comparable.” Thankfully, Labatt has sewn up sponsorship deals directly with three Canadian teams – Vancouver, Calgary and Winnipeg. The deals include ‘pouring rights’ in those city’s arenas, which, in Vancouver, makes Labatts the official beer of next year’s riot.

Finally, we bring you a tale of branding fail. Following the Boston Bruins’ post-Stanley Cup victory party, much was made of the $156,700 bar tab, which included a 30 liter, $100k “Ace of Spades” bottle of Armand de Brignac champagne. Scattered among the various other wines, spirits and beers was a single bottle of Amstel Light, which prompted some marketing maven at Amstel to put out a call for the Bruin who swigged it to come forward and discuss potential spokesperson duties. Sadly, CBS Sports has since reported that the Amstel-imbibing reveler was not a Bruin but a woman named Shallon Lester, who only ordered it because the aforementioned pricey champagne was “warm and gross.” Hmm… Maybe this is still salvageable… How about: Amstel Light: it’s cold and less gross?