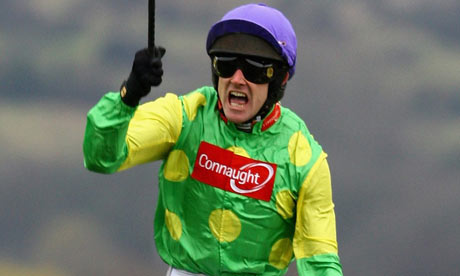 The first day of the Cheltenham Festival has already been dubbed Ruby Tuesday after the returning jockey Ruby Walsh made the day his own with three winners.

It was also first blood in the battle of the trainers as Paul Nicholls trained Walsh’s first winner, Al Ferof, in the Stan James Supreme Novices’ Hurdle.

Walsh’s second win was on board the 11/4 favorite Hurricane Fly in the Champion Hurdle where all the talk beforehand had been the withdrawal of Nicky Henderson’s Binocular due to a legal substance being found. None of this seemed to affect Hurricane Fly, who has already been installed as favorite for the same race in six months time.

Sponsors of the Champion Hurdle, Stan James, had a far from good result as they took an absolute pounding from punters.

Spokesman Garry McGibbon, commented: “To make matters worse we’ve had to give away a shed load of free bets as a consequence of Hurricane Fly winning.

“We ran a Free Bet Giveaway last autumn saying we’d giveaway free bets if Binocular won the Champion Hurdle, but because Binocular never ran we replaced him – as a goodwill gesture to all customers who took part in the offer – with Hurricane Fly.

“Add that to the fact we refunded all ante-post stakes on Binocular, it’s turned out to be a very costly way to mark our first sponsorship of the Stan James Champion Hurdle!”

There was better luck for William Hill as the horse they feared might lose them a great deal of money, Cue Card, didn’t get close to the winner of the Novices’ hurdle, Al Ferof.

The other races of the day included a win for the Richard Johnson saddled Captain Chris in the Arkle Challenge Trophy, second favorite Bensalem taking the 2:40, and Sizing Australia seeing it through to the line in the 4:00.

Walsh’s third win came on the favorite Quevega in the 4:40 and as with last year the horse never looked at all flustered in winning easily.