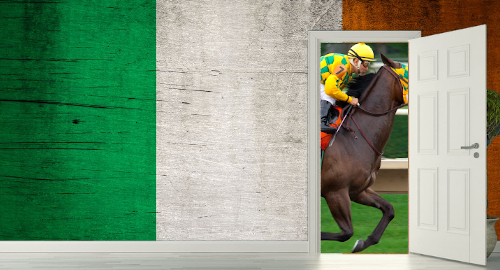 Ireland’s racecourses will allow a small number of spectators to watch the action live while a few UK courses are pressing ahead with bums-in-seats trial runs.

On Tuesday, the Republic of Ireland issued its latest Living With Covid-19 strategy, which at its current Level 2 will permit 200 bodies to attend live racing events. That number will rise to 500 if the country progresses to Level 1, but Irish racing could find itself back ‘behind closed doors’ if the situation downgrades to Level 3.

That 200 cap applies only if an outdoor venue has a minimum capacity of 5k, and only if organizers can ensure ‘robust protective measures’ to ensure the health and safety of those in attendance. And if the situation worsens to Level 5, racing would be forced to suspend all activities.

Horse Racing Ireland CEO Brian Kavanagh told the Racing Post that the 200-spectator limit was “not a sustainable number for a lot of racecourses.” Even the 500 limit “doesn’t give much leeway” but Kavanagh saw a flicker of hope in the government’s vague promise to work with stakeholders on “specific guidance” for “very large purpose-built event facilities.”

The situation is even more dire for on-course bookmakers who lack an online betting presence. On-course bookies weren’t granted access to tracks during the 10 fixtures that were run in Ireland between the imposition of behind-closed-doors racing and the total halt of sports on March 24.

UK racecourses swallowed a bitter pill last week when the government reimposed rules barring individuals from assembling in groups larger than six. That order was accompanied by a halt in the Doncaster Racecourse’s trial of spectators in stands just one day into the the four-day St. Leger Festival.

However, the Newmarket Racecourse in Suffolk announced this week that it has received permission to proceed with a trial of up to 1,000 spectators per day at Newmarket’s three-day Cambridgeshire meeting starting September 24. The decision came following discussions between the track, local authorities and the track’s Safety Advisory Group.

Jockey Club Racecourses east regional director Amy Starkey said the “vast” track “could safely space out several thousand people.” Starkey said she hoped next week’s trial “will provide important insights we can share across our industry and with other sports” as to how to safely welcome spectators back to venues.

Before the Newmarket trial, Warwick Racecourse will host 474 spectators at its seven-race National Hunt fixture this coming Monday (21). The relatively paltry figure means attendance will be limited to up to 200 horse owners, 150 annual members and 124 hospitality bookers.

UK bookmakers agree to give the horseracing industry a boost
Erik Gibbs
10 November 2020
.