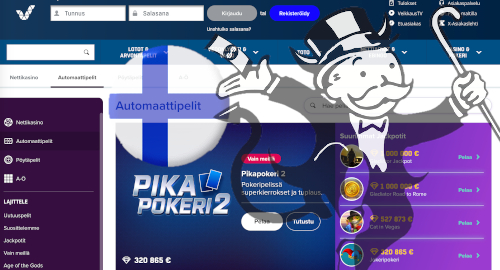 On Thursday, Finland’s Ministry of the Interior announced it was soliciting comments on “a proposal for reforming the Lotteries Act.” The key planks of this proposal are increased consumer protections, combatting prohibited gambling marketing and “securing Veikkaus Oy’s capacity to channel the demand for gambling.”

In case that last plank wasn’t sufficiently clear, the Ministry added that “the basic premise of the reform is that Finland’s gambling system will also in the future be based on the state monopoly in line with the government program.”

To preserve this monopoly, the Ministry wants to empower the National Police Board to compile a blacklist of internationally licensed gambling sites that market their wares to Finns, and local banks and other payment processors would be required to block the movement of money between these sites and Finnish gamblers.

Support for the state-run gambling monopoly remains relatively high –  71.7% in the most recent Finnish Institute for Health and Welfare (THL) report – but that support is slipping among every age demographic except senior citizens. Moreover, a plurality of Finns – and a majority of those aged 25-34 – object to the government taking additional steps to prevent their access to international gambling sites.

Getting back to the proposed reforms, the Ministry wants to prohibit marketing of “certain particularly harmful gambling games, such as slot machines.” Veikkaus is currently culling its retail slots operations after public relations gaffes involving young people accessing the products and general concerns over the ubiquity of the machines, both in Veikkaus-branded arcades and its ‘decentralized’ network of third-party retail partners.

The Ministry doesn’t intend to limit marketing for Veikkaus’ sports and race betting products, arguing that to do so would limit the monopoly’s “capacity to channel the demand for gambling.” However, Veikkaus couldn’t promote “betting events relating to games associated with particularly harmful effects because of the ambiguity in the interpretation of such information.” (Ambiguity, you say…)

Veikkaus imposed mandatory customer identity verification in its retail slots operations on New Year’s Day. Veikkaus plans to extend this requirement to “other gambling games” by the start of 2023, while lottery scratch cards won’t require identity verification until 2024 for some reason.

Interestingly, the Ministry also wants to allow Veikkaus to establish a subsidiary for “the provision of services other than gambling,” at least, not to the general public. The focus of this subsidiary would be on “providing gambling products and services to other companies.” It appears the government heard Veikkaus’ warning that its 2020 profits would likely come in €300m below forecasts due to the pandemic and is eager to secure new revenue streams.

Speaking of, Veikkaus announced in late-December that the ‘temporary’ loss limits (€500 per day, €2k per month) for ‘fast-paced’ online games – slots, bingo, lotteries, table games (not poker) and Tähdenlento (sweepstakes) – that were imposed at the start of the pandemic would now extend through the end of March.

The Ministry is accepting comments on the proposed changes until February 5, after which the government will pick through the suggestion box and then submit a final gambling proposal to Finland’s legislature in June.