Home / Business / Aussies curbed gambling during COVID, but those who gambled were happier 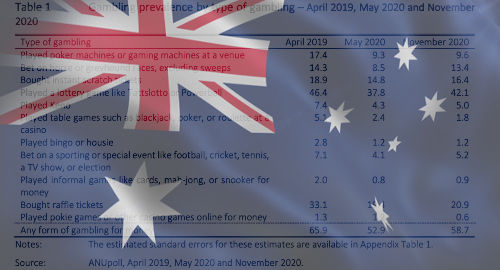 Australians dramatically curbed their gambling activity during the pandemic and gambling participation remains below pre-COVID numbers despite options returning as the country reopens.

New research released Tuesday by the Australian National University (ANU) queried over 3k adult respondents in each of two surveys in May and November to determine their level of gambling activity during the pandemic. The figures were then compared to a similar survey conducted in April 2019.

Last year’s survey found nearly 66% of respondents admitted gambling at some point in the previous 12 months, but May 2020 found this figure to have dipped to 53%, in part due to the closure of land-based gambling options in March. By November, this figure had inched back up to 58.7%, although that’s still significantly below the pre-pandemic norm.

The April 2019 to May 2020 decline was fairly evenly split between genders but, while female gamblers showed a negligible rise in gambling activity between May and November 2020, male gambling was up 7.4 points, only about 3.3 points below where it started in April 2019.

Australia’s youngest (18-24) and oldest (75+) gamblers had essentially returned to their April 2019 activity rates by November 2020, even as participation remains well below the April 2019 levels for those aged 25-54 years.

WHO DID WHAT
In terms of gaming verticals, the number of Aussies who played video poker (pokies) at land-based venues effectively halved from April 2019 to 9.3% in May 2020, and nudged up only slightly to 9.6% in November. Casino table games fell from 5.1% to 2.5% between April 2019 and May 2020 and fell again to 1.8% in November (likely due to Melbourne’s extended lockdown).

The survey doesn’t distinguish between land-based and online wagering – which might have helped dispel some enduring myths – but betting on animal-based racing fell from 14.3% in April 2019 to 8.5% in May 2020 and jumped back to 13.4% by November. Sports and prop betting went from 7.1% to 4.1% to 5.2% over the same period.

Australian law prohibits local gambling operators from offering online casino products, but there was still a daring 1.3% of respondents who managed to spin an online slot or two April 2019. That figure was basically unchanged (1.2%) in May 2020 but fell by half (0.6%) in November, possibly because local telecom watchdog has been harping about online casinos throughout the pandemic.

PROBLEM GAMBLING
The pandemic appears to have reduced the number of Australians considered to be ‘at risk’ of problem gambling behavior. In April 2019, some 13.6% of Aussies were considered to fit this frame. By November 2020, this stat had dropped to 10.3%.

The decline is noticeable even if you strip out Aussies who didn’t gamble over the past 12 months. In April 2019, some 20.7% of active gamblers were deemed ‘at risk,’ a figure that fell to 17.5% by November 2020. Even better, the subsections of ‘at risk’ show higher declines among those considered at moderate or high risk of problem gambling than those considered low risk.

ATTITUDES, HIDDEN BENEFITS
The ANU’s April 2019 survey also gauged respondents’ overall attitudes toward gambling by asking whether they agreed or disagreed with certain statements. Support was strongest for statements such as ‘there are too many opportunities for gambling,’ ‘gambling is dangerous for family life’ and ‘gambling should be discouraged.’

However, only 36.5% of respondents believed ‘it would be better if gambling was banned altogether,’ while 56.8% believed ‘people should have the right to gamble whenever they want.’ So politicians would be wise to put away their ban-hammers for the time being.

What’s more, the ANU’s ‘life satisfaction’ modeling noted that, among survey respondents queried before and after COVID-19, “those who gambled at all during the pandemic had a more positive change in life satisfaction than those who did not,” and this result “held whether we did or did not control for other characteristics.”