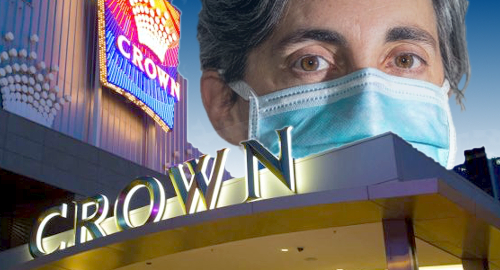 Australian casino operator Crown Resorts is facing fresh challenges after the state of Victoria imposed a new COVID-19 “hard boundary” around the city of Melbourne.

On Tuesday, Victorian Premier Daniel Andrews announced a new six-week lockdown of Melbourne as the state deals with a surge in new COVID-19 infections. The state reported 191 new infections on Tuesday, a total that surpasses anything in the state’s ‘first wave’ of infections.

The lockdown will take effect at 11:59pm on Wednesday and will result in the closure of most non-essential businesses. Individuals are only allowed to leave their homes for four reasons: to shop for food and supplies, health care and caregiving, outdoor exercise and study or work.

The Crown Melbourne casino announced a ‘staged reopening’ of its hotels and restaurants starting May 31 as Victoria began easing its COVID-19 restrictions. But its gaming floor, which was ordered shut in mid-March, remained off-limits as the state prohibited all gaming venues from reopening to the public.

In response to Victoria’s new rules, Crown issued a brief statement saying its “first priority is the health and safety of its employees, guests and the community.” That may come as news to several security guards at the Crown Promenade Hotel – a designated ‘quarantine hotel’ for returning overseas arrivals – who recently alleged that they’d been paid in cash during March and April despite asking for the payments to be wired into their accounts.

Crown’s shares ended Tuesday’s trading on the Australian Stock Exchange down 3.6% to AU$9.15, a low it hasn’t touched since mid-May but better than its mid-March nadir of just AU$6.

Last week, Crown’s local rival The Star Entertainment Group announced the ending of most restrictions at its flagship property in Sydney while also prepping the reopening of its two Queensland properties.

Crown plans a soft-opening of its in-development Sydney property towards the end of this year, while a full launch isn’t expected until early 2021. In April, Crown rejigged its financing to ensure it would be able to complete the AU$2.2b Crown Sydney project on schedule.