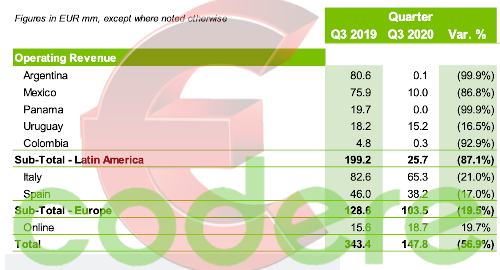 Spanish gambling operator Codere continues to bleed red ink in Latin America and its European retail operations are being hobbled just as they started showing signs of life.

Figures released Thursday show Codere generated revenue of €143m in the three months ending September 30, a 58.4% decline from the same period last year. The company reported negative earnings of €70.1m and a net loss of €62.1m, more than twice the €30.7m loss in Q3 2019.

As with Q2 2020, all of Codere’s regional land-based operations reported negative revenue growth in Q3, while the online unit was up nearly one-fifth year-on-year to €18.7m (two-thirds of which came via Spain). The Q3 online total was nearly €5m better than Q2, which suffered from the pandemic halt of major sports activity, although Q3’s online earnings were down 22.3% to €2.7m.

Total LatAm revenue was down 89.5% to €20.9m, as Argentina and Panama contributed precisely nothing during Q3, while Colombia slumped 94% to just €300k. Mexico, traditionally Codere’s second-biggest market after Argentina, fell 89% to €8.4m while Uruguay outshined the lot by slipping only one-third to €12.1m.

The European outlook turned sour since the quarter ended as both Italy and Spain headed back into pandemic lockdown. Codere put up a brave front, saying its ongoing restructuring and refinancing would provide “the resources and the appropriate capital structure to serve its short-term obligations until the full normalization of the business.”

The Spanish shutdown spoiled a positive start to Q4, which saw record retail sports betting revenue in October, while slots revenue had regained 85% of its pre-pandemic form. In Italy, October’s bingo revenue was running at 86% of 2019’s rate while video lottery terminals were doing 70% business, but all Italian retail ops were shut November 4 for at least one month.

Codere’s Argentine operations still don’t have a timeline for reopening but the company got some rare good news in late-October as it received preliminary approval to launch online operations in the city of Buenos Aires. It’s not a done deal yet, but it’s a start.