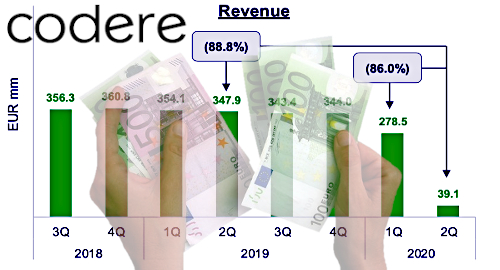 Spanish gambling operator Codere reported a nine-figure loss in the first half of 2020 amid general uncertainty about the company’s financial future.

The company noted that its retail operations around the globe were closed for most of the second quarter, and while online operations remained active, the suspension of major sports league activity meant their revenue was also in the red compared to H1 2019.

During Q2, all of Codere’s regional operations reported negative growth, with absolutely zero revenue from Argentina and Panama. Argentina was doubly impacted by a 51.7% devaluation of the local peso versus the Euro, resulting in negative earnings of €7.7m.

Codere said it has since resumed full operations in Spain, Italy and Uruguay, while operations in Colombia’s capital Bogota were still on hold. The Mexican business was partially restored but Argentina and Panama aren’t expected to resume until October. Codere said initial revenue generation in its active markets had been “generally better than our expectations,” ranging between 70-80% of pre-pandemic levels.

Even before COVID-19, Codere’s uncertain financial status was muddied by the ongoing economic upheaval in Argentina and last year’s discovery of accounting “inconsistencies” in its LatAm markets that ultimately resulted in the departure of Mexican chief Carlos Villaseca.

Codere was recently forced to go hat-in-hand to bondholders to secure bridge financing, which came with considerable interest obligations. This week, Codere warned that overdue gaming taxes and the costs of restarting its retail ops meant it was “critical” to complete the company’s planned restructuring “before the end of October.”

To promote its reopened operations, Codere hired creative agency Shackleton to devise a new international ad campaign. The creative types came up with a sports betting pitch based around the slogan “Football is uncomplicated, like Codere.” Tell that to the company’s investors, who’ve seen the company’s shares fall to roughly one-third of their value at the start of 2020.