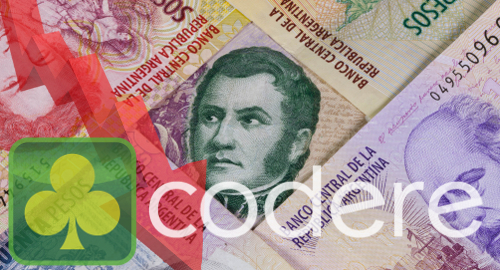 Spanish gaming operator Codere is warning that its profits could take a hit due to ongoing economic uncertainty in Argentina, the company’s largest market.

On Monday, Codere issued a profit warning following the close of trading on the Spanish stock exchange. The announcement reflected the company’s concerns for its Argentine operations in the wake of that country’s primary elections earlier this month, which delivered upsets to numerous incumbents while boosting local socialist candidates.

The resulting devaluation of the Argentine peso, which dropped 18% against the US dollar in the two weeks after the elections, prompted questions as to whether the International Monetary Fund would continue to distribute billions in bailout loans to Argentina over fears that the country would default.

Codere said Monday that the “significant’ devaluation of the peso and “deterioration” in the value of Argentina’s sovereign debt would likely reduce its Argentine market earnings by €6m in 2019. However, Codere said its rising presence other LatAm markets such as Mexico and Uruguay meant that its overall 2019 earnings were still on target to come in between €280m-€290m.

Codere won’t issue its official H1 2019 financial results until September 12, but the company did say that it expects its Q2 revenue to fall 5.6% to €355m thanks to its Argentine revenue declining 27.2% to €80m. However, its overall Q2 earnings are expected to rise 8.2% to €70.3m, as its non-Argentine business improved by nearly one-third thanks to a reduction in one-off costs.

In May, Codere reported that its Argentine operations had fallen by more than one-third year-on-year in the first quarter of 2019. The company said its Q1 figures suffered from €42m in unfavorable currency exchanges based on the sliding Argentina peso. The Argentine government also announced a new 3% tax on slot winnings in late-2018. Codere says it will accelerate its efforts to lessen its reliance on its Argentine operations going forward.