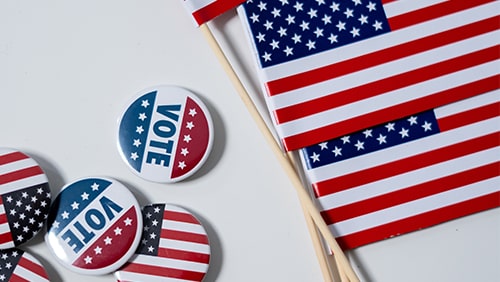 With the 2020 U.S. Presidential election now behind us, it appears that Joe Biden has become the President-elect and will take office in January. Of course, that isn’t entirely certain as President Donald Trump continues to raise legal concerns around the counting of votes, and makes personnel changes in the military that worry some over a potential coup.

Regardless, assuming the U.S. sticks to a democracy, there will be another U.S. Presidential election in 2024. And thanks to BetOnline.AG, we already have odds for who is favored to win it all. America is nothing without a perpetual speculation around who the next Commander in Chief will be, so let’s dig through the odds, shall we?

I’m grouping the first four candidates here because they make the most conventional sense for the next Chief Executive of the country. Despite Biden having won, the favorite to win in 2024 is now….

Why Harris? Well, Joe Biden (+1000) will be 78 when he takes the oath of office. Its hard to imagine an 82-year-old running for another four years, so speculation is that he’ll step down, giving Harris a clear path to win the top job through a primary process. But Biden, who is actually last in this frontrunner group, has already had his sister say he will run again, so don’t count him out.

On the GOP side is current Vice President Mike Pence (+800), who has all the qualities a conservative or Trump fan would want except maybe the charisma. A more acceptable candidate, if the right can get behind a woman, is former ambassador to the United Nations Nikki Haley (+900). She could be more of a moderate choice, and has been touted as a Presidential hopeful since she joined Trump’s administration.

The Candidates that maybe we don’t want, but we deserve

On the Democratic side, we have Andrew Yang (+1200), who might need some more lessons in campaigning if he’s going to have a chance. Pete Buttigieg (+1400), who badly needs more black friends. Michelle Obama (+1600), for the Democrats who lack imagination and like to keep things in the family. Bernie Sanders (+2000) who will be 83 in 2004 and has already had a heart attack. Beto O’Rourke (+2000) who tried once again to get a victory for a Democratic Candidate in Texas and failed. Finally, there’s Stacey Abrams (+2000), who appears to have tried the same thing for Georgia and succeeded.

On the Republican side is Donald Trump, who could run again in 2024 and would be 78, basically the same age as Biden now. He might very well have a good chance of winning too, based on this year’s results, and depending on how the next four years ago.

The rest of the candidate list is long, and breaking it all down into brackets doesn’t make much sense for here. So let’s do a few hot picks from each side of the aisle.

After everyone else I’ve already named comes Alexandria Ocasio-Cortez (+2200), or AOC if you prefer. AOC will be barely old enough to run in 2024, and although she’s been favored in previous odds, she’s now fallen behind Harris due to the outcome of 2020. But if she wants to, AOC can run for president in 2024, and he’s got a strong chance to win.

Next is New York Governor Andrew Cuomo (+2500) who may try to use his handling of the Covid-19 pandemic to try and win the top job. He should ask Rudy Giuliani how that went after 9/11.

Then we get into a bunch of less successful candidates, already having failed to win the presidency or obtained named recognition. Top of the this group is Elizabeth Warren (+2800), followed by Michael Bloomberg (+3500), Amy Klobuchar (+4000). Those who haven’t run before, or were forgettable if they did, are Gretchen Whitmer (+4000), Deval Patrick (+5000) and Sherrod Brown (+5000).

This list would be incomplete if I neglected to mention Hillary Clinton (+8000), who could try to win the Presidency in a third try at the age of 77.

The GOP candidates look a little more interesting to me, because I have no clue who America picks if Trump isn’t on the stage. Top choice could be Tim Scott (+2500), a black Republican from South Carolina. I mean, it could happen, right?

There’s also Ted Cruz (+3300), who finished second to Trump in the 2016 GOP primaries. It doesn’t seem he’s well liked by his colleagues, but finishing second in a crowded field with Trump had to count for something.

For those who want Trump, but maybe younger and more energetic, there’s Donald Trump Jr. (+4000). That would certainly help Trump fans who bought lots of merchandize and still want it to be relevant.

To finish up this part of the list, let’s talk about Dan Crenshaw (+5000), my personal favorite for 2024. He’s got all the same policy positions as Trump, making him popular for that voter base, but he’s managed to maintain a more popular and moderate perception from most of the media. And he looks like a pirate, which has won me over.

Top of the list of celebrities who always could run, but likely would be a disaster is Mark Cuban (+3300), who has taunted Trump in the past. He might be less willing to run without Trump in office.

Kanye West (+5150), the only 2020 candidate to have already conceded, is in there. It would be a sad state of affairs if his slogan ends up being “Vote West: a return to civility.”

If you want your Democratic candidate to be funny, maybe go with Jon Stewart (+6600). He’s demonstrated he cares about policy, but his debate with Bill O’Reilly showed he might not be a worthy opponent for someone like Kanye West.

So who will run, and who will win?

Geeze, we don’t even know for certain who will be President next year, never mind in 2024. In all likelihood, one of these politicians is going to have a Barrack Obama like moment, giving a tremendous speech sometime between now and 2023 and gaining the national spotlight. Go easy on your bets until that happens, and never count out Trump.