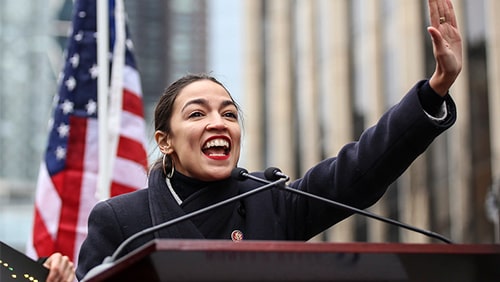 Former Vice President Joe Biden will face off against President Donald Trump in the U.S. 2020 elections. Considering though Biden’s advanced age, and the general idea that he may only be a one term president, who’s going to be running for President on the Democratic side in 2024? Although America is a democracy and anything could happen in the next four years, these things tend to build up over time, so we have a pretty good idea of who the leading candidates might be, and who the sportsbooks favor.

Leading the odds at the moment is New York Congresswoman Alexandria Occasion-Cortez (AOC). By election day 2024, AOC will barely be 35 years old, the minimum age requirement for a presidential hopeful. According to polling by YouGov, She’s got the name recognition, comparatively decent favorability ratings, so she could pull it off.

Consider though that during her push to get Bernie Sanders nominated in 2020, she tried to downplay talk she could run in 2028:

.@AOC on 2028 rumors: I'm not a person who aspires to a position, I aspire to a mission. We have a lot of problems that need addressed, but we rely too much on saviors. We can't just swing from person to person. pic.twitter.com/CnFS1R1xbx

Tied with her is Joe Biden, the current nominee. Biden will be 81 on election day 2024, and he’ll have all the baggage or momentum of either a 4-year term in office, or a prior defeat to Donald Trump. He’s a pretty good bet if you think he’s going to win this year, and has the stamina to go for two terms.

But should he decide to not seek the candidacy, next in line would have to be Vice Presidential candidate Kamala Harris. She’d likely face a primary challenger, much as Al Gore had to from Bill Bradley in 2000. Her ability to lock up the nomination again may come down to how Biden does in the next 4 years.

Further down in the odds is Elizabeth Warren. Touted as the female, less left leaning candidate when compared to Bernie Sanders, Warren will be 75 in November 2024. Still young enough to run, but everything will hinge on which way the American political spectrum swings for her.

Bernie Sanders ranks just below her in the odds. He’ll be 82 on election day, and considering AOC has the exact same platform, I would discount him going forward.

Tied with Sanders is Michelle Obama. Of everyone listed in these odds, she’s probably the most well liked, but she also has made it plain that she’s not a politician, so bet on her at your own risk.

New York Governor Andrew Cuomo leads the bottom of the pack. He brings the experience of governing a state, but also the baggage of the state that most mishandled the early stages of the Covid-19 pandemic. For him, everything will depend on how much he controls the narrative of that event going forward.

At the bottom of the list are Pete Buttigieg and Michael Bennet. Buttigieg would have to make a herculean effort to prove he isn’t actually some kind of agent of the CIA, and actually win over some black voters. Bennet, a senator from Colorado, would have to build up his name recognition fast so he’s not just one of the middle-aged white guys who gets knocked out early, a common theme of recent Democratic primary campaigns.