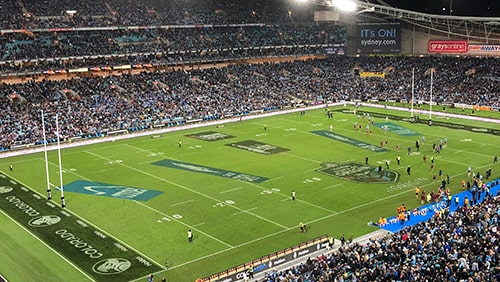 New South Wales (NSW) have made wholesale changes to their side as they attempt to square the State of Origin series against Queensland at ANZ Stadium in Sydney.

The home side were shocked by a Queensland side, considered to be the biggest underdogs in the last 40 years of State of Origin history. NSW were backed by league experts to overwhelm an injury-depleted Queensland side, missing several key stars.

Queensland were able to overturn a 10-0 halftime deficit to record a memorable 18-14 win in front of a partisan Adelaide Oval crowd, witnessing their first Origin game.

The Maroons will head into game two in Sydney with plenty of confidence, knowing more win will clinch the State of Origin Shield, stopping an NSW three-peat. The Maroons have been forced to make several changes to their starting side. Valentine Holmes will make his first appearance, after his return from the NFL at fullback. Dunamis Lui comes into the starting side at prop in place for Christian Welch, who was ruled out due to concussion protocols. Jaydn Su’A comes into the side at the expense of Cohen Hess.

NSW captain Boyd Cordner has been ruled out and playmaker has been demoted to the reserves bench after a poor performance in the opening game. South Sydney playmaker Cody Walker gets his chance to impress with a chance in the starting side.

NSW will be confident of turning around the surprise opening game result, dominating most areas of the game, except the scoreboard. The Maroons were in a similar position last season; after winning the opening game, they were well beaten in the next two.

Queensland enjoyed some lucky bounces and some favourable calls from the officials in the opening game. They struggle for the same type of luck in front of a hostile Sydney crowd. The Blues will be aiming for a fast start and if they can keep the ball in hand, should be able to square the series and set-up an exciting finish for game three in Brisbane.