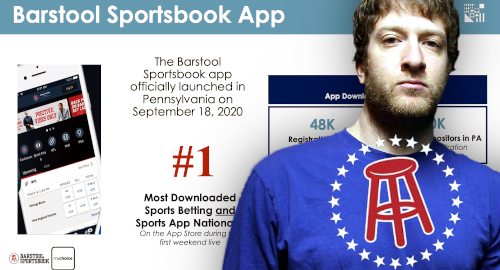 Figures released Thursday show PNG generated revenue of $1.13b in the three months ending September 30, down 16.6% from the same period last year. However, in what’s becoming a pattern with US regional casino operators, PNG’s adjusted earnings gained 10.2% to $343.6m while net income more than tripled to $141.2m.

The lone revenue gainer was PNG’s ‘other’ grouping, which includes its nascent sports betting, online gambling and social gaming operations. ‘Other’ revenue nearly doubled year-on-year to $23.7m while the segment cut its net earnings loss to $14.6m from a $25m loss in Q3 2019.

PULL UP A STOOL

PNG’s Barstool Sportsbook app made its official debut in Pennsylvania in September and the company cited download stats as proof of the wisdom behind its controversial decision to acquire a 36% stake in Barstool Sports earlier this year.

As of October 24, PNG said the app has been downloaded 310k times across the US, although the app is currently only licensed to take wagers in Pennsylvania (but PNG hopes to add Michigan before the year is through). It has signed up 48k Pennsylvania customer accounts, of which 30k have made deposits and collectively wagered $78m.

Some of the Barstool Sports’ principals have already come under fire for their enthusiastic promotion of the betting app, including something called The Overs Club. Basically, bettors who successfully wager the ‘over’ on the score of a specific game can win a Club jacket and “lifetime membership to the most exclusive club in America.”

You have to wager at least $100 to participate in this contest, which some regulators might view as an overly aggressive incentivization for some bettors seeking the dubious benefits of garnering Dave Portnoy’s stamp of approval. PNG said Thursday that some 3k app users had already joined the Club via Monday Night Football.

THE ROAD OF EXCESS LEADS TO THE PALACE OF CHA-CHING

Snowden added that promotional credits as a share of the app’s betting handle had fallen from 7% in September to 3% in October, leading to a “meaningful” gain in net gaming revenue. That wouldn’t actually be hard, as the app lost $2.8m in September, largely due to the aforementioned bonus offers.

Regardless, Snowden said the app’s launch had “exceeded every one of our goals” with the exception of in-play betting, which has evidently failed to catch on to the extent that PNG believed possible. Moreover, this success/excess has been achieved “without any meaningful external marketing spend.”