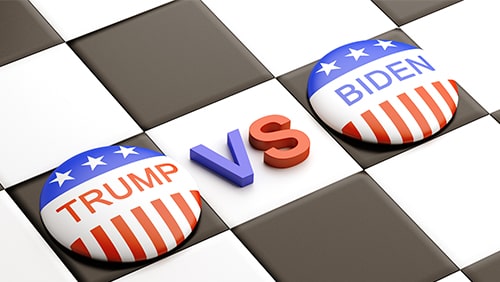 The final U.S. Presidential Debate has now come and gone, giving the candidates their final chance to directly address each other and win over voters. With former Vice President Joe Biden looking to secure a win, and President Donald Trump hoping to pull off another historic upset, there was a lot at stake. Looking at the election odds, before and after the all important 90 minutes of discussion, it looks like neither candidate accomplished very much.

How did the debate go?

The debate, which for the first time muted the candidates microphones to avoid excessive interruptions, ended up being much more within the norms of American expectations. That resulted in a more polite evenings, but with no less substance discussed. Trump attacked Biden on recently reported scandals, his support of the 1994 Crime Bill, and the prospect that Biden would shutdown the economy over Covid-19. In return, Biden focused on the casualties of the pandemic, Trump’s hidden bank accounts and accused him of being racist.

From my perspective, this debate ended up going much better for Trump than their first contest. Simply for the fact that he couldn’t interrupt everything Biden and the moderator said, he ended up looking more professional, and low-information voters may take his charges against Biden on face value.

That doesn’t mean he won though. As with everything in the U.S. today, that decision very much depends on where you get your news.

CNN saw it as a minor Biden victory:

what the heck is this that Sean Hannity just aired lol. pic.twitter.com/uW3zl9L8d2

Ah, yes, everyone saw whatever debate they wanted to see.

No really, who won? Let’s check the odds

Generally speaking, Biden held his ground and saw no movement at any of the sites we checked. There was a small bump for Trump from his performance.

Based on our breakdown of the odds and polls, it still looks like Biden should be considered the heavy favorite to win. But could the election be stolen somehow?

The Russians and Iranians are coming

News broke late Wednesday that Iran had allegedly used voter information to email voters in Alaska and Florida. In the emails, they threatened the recipient to vote for Trump, or “we will come after you.”

The voter information used by Iran was reported to have come from a hacker who was selling it online. Russia is also believed to have bought the same information, and is making plans to use it somehow.

This was quickly covered in the debate, but neither candidate said much of substance on it before getting into which candidate loved or hated Russia more.

“Russia is perhaps the most sophisticated adversary that uses these disinformation techniques. Voter information is easy to obtain, and the goal is to use a mass of that information to target thousands of voters with emails or texts designed to stoke fear in people about how safe it is to vote. This is an operation designed to hack people’s sense of safety and privacy around the election process.”

The question is if any country can meddle with the election enough at this point to sway it. By one count, 47.1 million Americans have already voted. If anyone wants to steal this thing, they might have to do it at home and through the courts now.