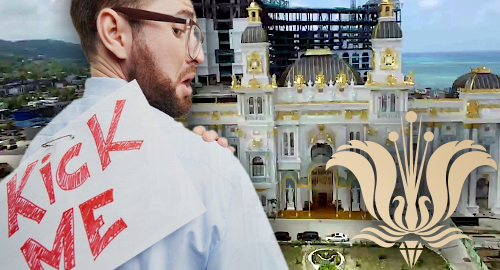 Saipan casino operator Imperial Pacific International (IPI) has bought itself six more months in which to craft new excuses for not paying its bills.

On Thursday, the Commonwealth of the Northern Mariana Islands (CNMI) Lottery Commission voted to allow IPI to defer for six months its required $20m payment to the Community Benefit Fund (CBF). The payment was (over)due October 1, meaning IPI will now have until April Fools’ Day – a little on the nose, guys – to come up with another reason for not paying.

For the record, the $20m annual CBF payment is a condition of IPI’s CNMI casino license, yet the company – which pays zero tax on its gaming revenue – appears to have made little effort to honor this modest commitment. Records are sketchy, but CNMI pols claim the company was already $37m in arrears before this latest payment came due.

IPI has been bleeding red ink for years now, as most VIP gamblers lost interest in traveling to IPI’s unfinished Imperial Palace resort, while the few who did show tended to skip town without paying their sizable credit markers. The pandemic-related closure of Imperial Palace in March merely poured gasoline on an already raging dumpster fire.

IPI may not have cash but it has plenty of cheek, as evidenced by the lengthy list of fiscal forgiveness it sought from the CNMI government a couple weeks back. IPI wanted to pay its annual $15.5m license fee – which was due August 12 – in instalments, cut its annual $3m regulatory fee in half, and to legally empower the company to chase down its many creditors (most of whom live in China, where gambling debts are unenforceable, but whatever).

However, the Commission disappointed IPI by pointing out that it lacks the authority to unilaterally revise the terms of the company’s gaming license. Relief on those other requests can only come through the cooperation of the Commonwealth Casino Commission and state legislators, many of whom are growing increasingly weary of IPI’s inability to make a financial commitment and stick to it.

IPI has cited the pandemic as creating ‘force majeure’ conditions that entitle it to some regulatory leeway, but IPI’s sorry state long predates COVID-19. Coupled with the company’s growing list of both civil and criminal legal threats, it’s entirely likely that IPI won’t be a going concern by next April.

The entire Asia-Pacific casino market is currently in a deep, deep hole and even more robust markets such as Macau and Manila don’t expect things to return to ‘normal’ anytime soon. At this point, IPI’s best bet is a time machine and one of those memory-wiping gadgets from Men In Black.