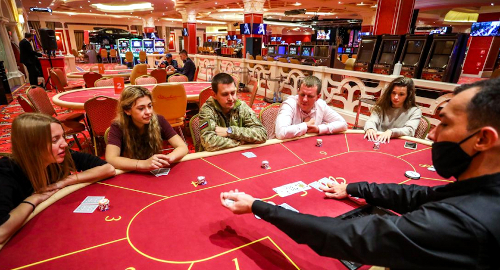 Russia’s gamblers may finally have another casino at which to play, although any winnings they collect will face greater scrutiny from the tax authorities.

Last Friday, the Shambala casino in Russia’s far east Primorye gaming zone invited local media to take a tour of the facility, which is prepping for its imminent grand opening after years of preparation. The tour was conducted by Maxim Smolentsev, general director of the casino’s parent company Shambala CJSC.

The property is still far from complete, but local media reported that its gaming floor featuring 500 slot machines and 23 gaming tables is ready for action. A ‘Foodmarket zone’ overseen by chef Anton Strelchenko is also ready to welcome hungry guests, but other restaurants, non-gaming amenities and its VIP gaming rooms are still reportedly a work in progress.

The casino also has the now standard health and safety protocols in place, and Smolentsev admitted that he still doesn’t know “how things will be with inbound tourism in Russia in connection with the pandemic.” But whenever tourists are ready to travel, Smolentsev said Shambala “will try to provide first-class service.”

While Shambala is conducting a soft-launch to ensure its 350 staff are ready for the real thing, the official launch date remains a mystery. The property has already missed several proposed launch timelines, only some of which have to do with the monkey wrench known as COVID-19.

While Primorye has grand plans to host up to a dozen casinos, only one casino – Suncity Group’s Tigre de Cristal – has so far opened for business. Two other projects – NagaCorp’s Naga Vladivostok and Diamond Fortune Holdings’ Imperial – are proceeding with their development at a pace that would embarrass a snail.

Primorye casinos enjoy one of the world’s most favorable tax environments, as operators pay a flat fee for each gaming table and slot machine rather than a tax on gaming revenue. But the casinos will now face increased accountability regarding winnings paid to casino customers.

Russian media reported that President Vladimir Putin signed a new law that will require casinos and slots hall operators to collect information detailing winning customers’ names, passport numbers and/or taxpayer identification numbers. Customers will be required to sign documents affirming the accuracy of this information before winnings are paid.

The new rules won’t apply to foreign nationals. The idea is to streamline this process while also ensuring the casinos aren’t deterring foreign gamblers from making the trek to Primorye.