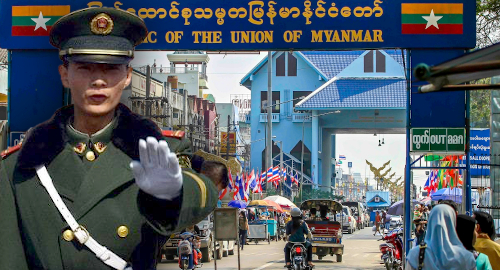 China has warned its citizens not to be lured into working for cross-border gambling operators based in Myanmar, while also warning against gambling during the annual Golden Week holiday period.

This weekend, China’s Ministry of Foreign Affairs announced that it had received reports of “many criminal cases” in which citizens accepted offers to work for allegedly legit companies in the northern region of Myanmar, only to find themselves “forced to engage in illegal and criminal activities such as telecom fraud and gambling.”

The warning claimed that Chinese citizens who accepted these job offers and traveled to Myanmar later found themselves subject to acts of violence, illegal detention and extortion of relatives back home to secure their freedom, while others have been “forced into prostitution.”

While Myanmar has yet to formally authorize any legal casinos, dozens of gambling operations have long flourished in areas such as Laukkai, which features a large ethnic Chinese population. In 2017, three of these venues were overrun by a group of heavily armed gunmen who reportedly made off with over US$73m in cash while killing several local residents and wounding around 100 others.

This is the second time in recent months that China has expressed concern over Myanmar’s gambling sector. In August, China refuted claims that a special economic zone along Myanmar’s southern border with Thailand – which boasts numerous gambling operations, including some cryptocurrency-based online gambling ops – had ties to China’s international Belt & Road Initiative.

Gambling is increasingly on the mind of China’s government, as the Ministry of Public Security issued a notice on Thursday offering “tips on prohibiting gambling and refusing gambling” during the annual Golden Week holiday. The government also warned citizens that it would “severely crack down” on anyone engaging in, offering or facilitating unauthorized gambling.

This summer, China unveiled a public snitch line to which citizens could report suspected illegal gambling activity and receive cash payments if these reports led to convictions.

Thursday’s notice reminded citizens of the “heavy awards” available to such finks, while promising to “mitigate or exempt the punishment of gambling criminal gang members” who confess their crimes and point the way to higher-up members of gambling operations.