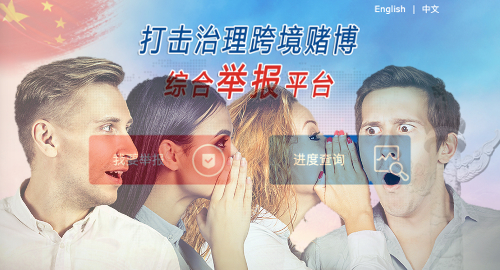 On Friday, China’s Ministry of Public Security announced the launch of its “comprehensive reporting platform to combat cross-border gambling.” The Ministry unveiled a new QR code that patriotic citizens can scan with their phones, while desktop users can either email or visit a new website to both report on illegal gambling or check the progress of a previously filed complaint. There’s even a fax number (!) to “welcome the broad masses to actively report” unauthorized fun.

In addition to asking remorseful gamblers to report their activities (and get revenge on the sites that took their money), the Ministry is also encouraging “people involved in gambling … to expose relevant crimes and seek leniency according to law.”

Speaking of, in what appears to be a coordinated move, the finking platform was unveiled just one day after officials in Jiangsu province announced the sentencing of an illegal online gambling ringleader to 16 years in prison and a financial penalty of RMB123m (US$17.4m).

The Ministry announced its snitching platform plans two months ago as part of its plans for ‘Strictly Combating Cross-Border Gambling and Telecommunications Network Fraud During the [coronavirus] Epidemic.’ While the Ministry has issued similar vows in the past, the subject appears to be a major focus for top officials this time around.

China’s new anti-gambling tools include a focus on disrupting payments via ‘underground banking,’ which is more generally linked to Macau casino junket operators, as well as the creation of an illegal gambling blacklist targeting both operators and their staff in ‘overseas tourist destinations.’