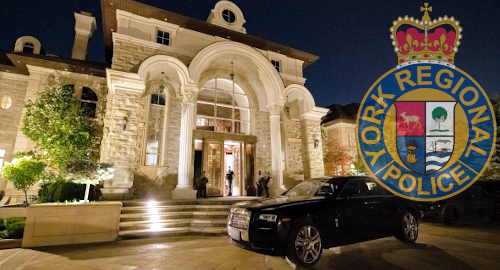 An illegal casino operation in Ontario is shedding light on how VIP gamblers have been filling the void caused by the COVID-19 shutdown of legal venues.

On Wednesday, York Regional Police announced the arrests of 32 individuals suspected of operating a “high-end illegal casino” out of a 53-room, 20k-square-foot mansion in Markham, just north of Toronto. The arrests, which were part of a probe titled Project End Game, occurred on July 23 but are only now just making headlines.

The C$9m (US$6.8m) mansion was among the items seized during the raid, along with C$1m in cash, 4,000 bottles of premium liquor, 11 firearms – including a rifle with a fully loaded 30-shot clip kept close to the action, just in case – as well as numerous gaming tables and electronic gaming machines.

The mansion also offered its guests the opportunity to crash overnight, along with unspecified “spa treatments,” leading police to conclude that the underground operation may have had ties to human sex trafficking.

Project End Game began last year, when police received reports of dodgy doings at the mansion. On July 3, police raided an illegal casino at a commercial unit in the Toronto suburb of Scarborough, arresting five individuals. On July 30, three more arrests were made following a raid on a private residence in Vaughan.

All told, police have made 45 arrests, with charges having been filed against 29 suspects, including 52-year-old Vaughan resident Wei Wei and his wife Xiang Wei Chen, who are listed as owning the Markham mansion.

Police have launched a new operation, Project Double Down, which will tug on the End Game threads and see where they lead. Police stated that illegal gambling operations have flourished since Ontario shut its licensed casinos this spring due to COVID-19.

LEGAL CASINOS RETURNING, BUT FOR HOW LONG?

The Ontario Lottery & Gaming Corporation (OLG) cleared casinos to reopen in July, but under such tight pandemic restrictions – including no table games, drinking or dining – that most operators saw little point (or profit) in restarting operations. But Great Canadian Gaming (GCG) reopened 11 Ontario casinos this week, despite the province undergoing a surge in new COVID-19 cases.

Last week, Caesars Windsor announced that it would reopen on October 8, but only for invited Caesars Rewards members and only to 50 guests at a time. Invited guests must wear masks, fill out health questionnaires and reserve their slots seats well in advance. For instance, the available two-hour slot windows at GCG’s Casino Woodbine are currently booked solid for the next five days.

Gateway Casinos & Entertainment has yet to announce when it might reopen its Ontario venues but revealed last week that it had been granted access to C$200m in emergency liquidity funding from the federal government to tide it over until something resembling normalcy is restored.

Meanwhile, casinos in the neighboring province of Quebec are going back under lockdown due to the local COVID-19 surge. On September 21, the Loto-Quebec provincial gambling monopoly announced that its four casinos and two gaming halls would shut down every night at midnight, with alcohol service cut off at 11pm. The province’s video lottery terminal network would also shut off at midnight.

On Tuesday, Loto-Quebec announced that Casino de Montreal and other land-based gaming options across Greater Montreal would close completely as of October 1 and would remain closed until October 28.

The province’s other three casinos are for the moment still open, but CTV reported Wednesday that a dealer at the Casino du Lac-Leamy in Gatineau had tested positive for COVID-19. Gamble while you can, kids.