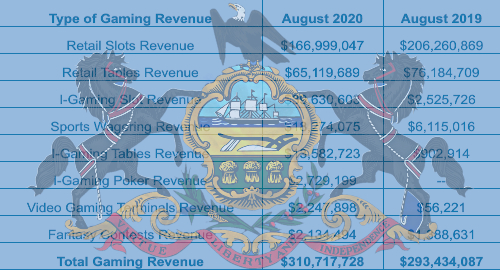 Pennsylvania’s gambling market continued its post-pandemic rebound in August, thanks to a record performance by its online gambling and sports betting operations.

August 2019 was the first full month of Pennsylvania’s regulated online casino market, and a lot has changed since then. August 2020’s online slot revenue hit $39.6m, up from just $2.5m a year ago, while online table games went from $903k to nearly $13.6m. The state’s lone online poker operator (PokerStars), which hadn’t yet launched in August 2019, added $2.7m to August 2020’s total.

All told, Pennsylvania’s online casino market earned nearly $56m in August, a modest $1.6m ahead of July 2020’s result but a new state record all the same. Rivers Casino Philadelphia claimed $17.14m of this total, while Valley Forge Casino Resort was a distant second at $8.7m and Parx Casino ranked third with $7.45m.

Sports betting revenue nearly tripled year-on-year to slightly under $18.3m, all but $2.83m of which was earned online. Betting handle hit a record $365m, up 122% from July as major league sports returned to the airwaves following their pandemic halt.

Valley Forge and its FanDuel partner claimed the betting handle crown with $149.2m, with the Meadows Casino/DraftKings tandem a distant second with $88.2m and Rush Street Gaming’s BetRivers and SugarHouse brands third with $57.4m. The trio accounted for nearly 81% of August’s total handle.

This week saw the long-awaited launch of Penn National Gaming’s Barstool Sportsbook app, so September’s numbers should offer an early indication of whether PNG’s pricey decision to take a 36% stake in Barstool Sports was worth it.