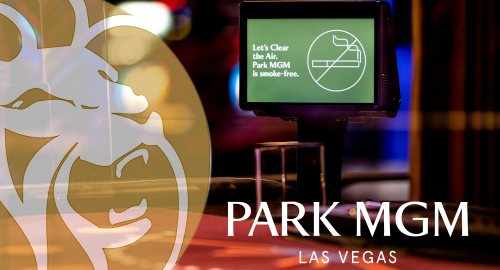 Casino operator MGM Resorts plans to reopen its Park MGM property as a smoke-free venue, the first such facility on the Las Vegas Strip to permanently kick tobacco to the curb.

Last week, MGM announced that it would reopen its Empire City Casino in New York on September 21. New York recently confirmed that its commercial casino operators could reopen on a limited basis as of September 9, and Empire City says its slots and electronic table games will be in operation, while bars and beverage service will remain closed for the time being.

On Monday, MGM announced that its Four Seasons Las Vegas property will reopen on September 25 while the Park MGM resort and its affiliated Nomad hotel will follow suit on September 30. These openings will mark the last MGM properties to restart operations since the company was forced to shut down its retail casinos this spring due to the COVID-19 pandemic.

While Park MGM will have certain restrictions on its gaming and non-gaming amenities when it reopens, the company has decided to impose a total indoor smoking ban, making the property The Strip’s “first fully smoke-free casino resort.”

MGM Las Vegas president Atnon Nikodemus said the Park property’s delayed reopening allowed the company to identify “an opportunity to be responsive to recurring guest demand for a fully non-smoking casino resort on The Strip.” Nikodemus noted that smoking was permitted at the company’s other properties, thus offering “an array of options for visitors.”

When Nevada began reopening its casinos, it imposed a temporary smoking ban to ensure guests weren’t threatening the safety of others by removing their masks. In August, a survey found 72% support for permanent smoking restrictions on casino gaming floors.

New Jersey’s Gov. Phil Murphy relaxed indoor smoking restrictions at Atlantic City casinos at the start of this month. However, Murphy reimposed the restriction just days later after public health groups noted research that suggested second-hand smoke was a means of spreading the coronavirus. Murphy said the science indicated “smoking is too big a risk to take.”