Home / Business / Where a door closes, a (betting) window opens Is the digital Triple Crown the future of horseracing?

“The world that we used to know,

People tell me it don’t turn no more… “

It was eerie. Kentucky Derby day, 2020 it was televised all day, of course, every race leading up to the Big One. The show’s big centerpiece was the Churchill Downs grandstand. Well kept up and newly painted, neat as a pin. Why not? There was nobody there to make a mess or even a little untidiness. The grandstand itself can hold about 100,000. The infield, the center of the track itself, can hold another 80,000. But this time – no spectators whatsoever, in the stands, in the infield, anywhere on the grounds. There were maybe a thousand human beings in the stands. But these were the staff of Churchill Downs, maintenance, security, the media people, and the horsemen themselves. Not a civilian in sight. 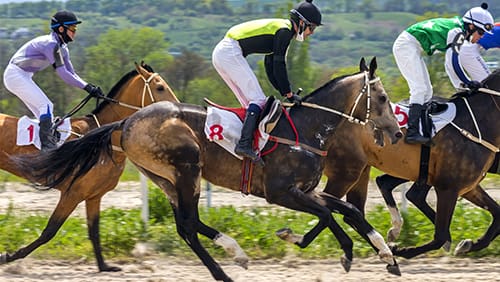 The horses ran in front of an empty grandstand. It was like one of those old movies about life after a nuclear war, where the heroes wander through cities that are completely deserted. A weird sight to see. (Full disclosure: the author’s father was a thoroughbred trainer of 60 years standing. I grew up in the game. Kentucky Derby day with no fans? That could only be a dystopian fantasy. But there it was- and it felt like seeing your own house standing open and bare.)

At least they didn’t do like baseball, and put cardboard cutouts of people in the stands with prerecorded crowd noises. No, they ran a good tight race, even if ‘Tis the Law did get edged out by Authentic. Still, with nobody actually there to bet or to buy mint juleps, how could they possibly make any money, apart from the TV ads? Authentic paid $18.80 on a two dollar pari-mutuel bet to win. How did they handle that?

That was the one part nobody was worried about. About a third of those TV ads were for Twin Spires betting service. Can’t go to the track? Coronavirus closed your local bar where that guy is making book? Not to worry- the whole thing was online and streaming live.

The Shape of Things to Come

Which is a good thing . The Preakness, now the last of the Triple Crown instead of the middle, is due to run October 3rd, also with no live spectators. The phrase has been overused to a fair- thee- well, but this state of affairs may be the “new normal” – for horse racing, for sports generally, and perhaps even for the whole gaming industry.

For decades now, horse racing has been in decline, mainly due to a failure to recruit the successors to its former main demographic, blue-collar males over the age of fifty. And it has been using online betting to stay afloat. Bets are constantly crossing state and national borders with no problem. The system has been worked out. Participating gaming authorities have agreed among themselves as to who gets how much, and who is in charge at any given point in transmission. (It’s not the money that’s important; it’s the amount).

But there are other concerns as well. A brick-and-mortar racetrack needs hundreds of acres – for the stables, for the grandstand, grandstand parking, and so forth. But as long as racing was local and live events only, the tracks had to be located near populous urban centers.

Which means that the land they sit on is increasingly worth more than the revenue stream from racing. Tracks all over the country have been closed down and turned into shopping malls and developments. The cost of replacing these facilities – hell, ordinary improvement and upkeep on the existing ones- gets more and more prohibitively expensive each year.

The standard remedy for these ills has been to lobby the state gaming authorities for tax breaks, incentive payments for state breeding programs, and so on.. Even now, horse racing retains considerable clout in the various statehouses where it is licensed. But these are patches, not prosperity.

Suppose the process of wagering on horse races became completely digital, following the example (an emergency, I grant you) of the Triple Crown this year?

It is already possible for horse players to make bets on races all over the USA, and, depending on the betting service one subscribes to, also on races in Europe, Asia, Australia and Latin America. If the betting can be drawn in and centralized, then why not the races themselves, too?

Could there be a centralization of horse racing, particularly thoroughbred horse racing, in one or more favorable jurisdictions? After all, the USA has cheerfully exported its industrial base (and the job that go with it) to locations abroad because of lower costs and friendlier regulations. Why couldn’t that work for horse racing as well? The difficulties aren’t insurmountable. Countries like Chile and Argentina have a rich tradition of horsemanship and horse racing. Champion horses from these locales have been shipping North to race in the USA for generations now. (High quality tack and saddles, too. I oughta know, my mother swore by them. )

What would prevent a consortium of racing authorities, including state level racing authorities in the USA, from licensing a central location ,for horse racing down in Latin America?True, these countries are far from the USA in terms of geography; but not in terms of time. The time difference between Buenos Aires and Chicago is only about two hours. Between Boston and Montevideo, only about one hour. In other words, an American horse player won’t have to stay up half the night, or roll out extra early in the morning, in order to take his business to these newly licensed establishments.

Suppose, instead of trying to maintain increasingly expensive and difficult physical plants within the United States, US gaming authorities and stakeholders were to license, or otherwise arrange for dedicated and special horse racing facilities in these low- overhead– but- quality- horse locales?

As with the existing online horse betting networks, the various authorities involved could easily establish a system whereby every race they license is legit and everybody involved gets a cut.

Of course there would be opposition to such a reorganization, principally from the vested interests already holding licenses from the various state/national authorities. But if the current coronavirus panic has demonstrated anything, it’s that the established order is by no means as secure and unassailable as its operators and vested interests would like to think.

Any surfer will tell you: you can’t fight the incoming waves. But if you’re smart and prepared, you can ride them. It remains to be seen whether the assorted authorities and vested interests overseeing gaming and gambling in the USA will recognize the challenge for what it is, and get on their boards in time to catch the wave.

Everybody in the pool? Kentucky Supreme Court and “instant racing”
Martin Owens
9 October 2020
.