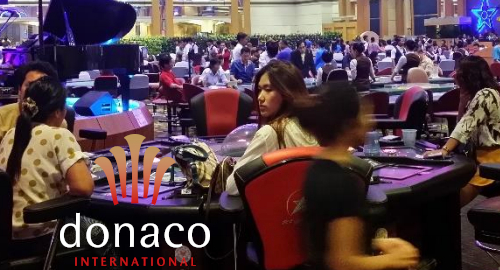 Asian casino operator Donaco International took a beating in its most recent fiscal year and isn’t making any forecasts for the year ahead.

On Monday, the Australian-listed Donaco reported that it had booked a net loss of AU$59m (US$43.5m) in the 12 months ending June 30, a significant improvement over fiscal 2019’s AU$198m loss. Group revenue declined 38% to AU$53.5m while earnings slipped nearly two-thirds to AU$10.3m.

Donaco attributed the bulk of the net loss to a non-cash impairment charge of AU$50.5m after downgrading the value of the gaming license at its main Star Vegas property in Poipet, Cambodia. The company took the hit based on the uncertainty surrounding Star Vegas, which closed in April due to COVID-19 and hasn’t yet received Cambodia’s permission to reopen.

Star Vegas, which accounts for around three-quarters of Donaco’s operations, reported FY20 revenue falling 45% year-on-year, while earnings tumbled 63% and net profit after tax slid 54%. VIP turnover slipped 45% due to “increased competition in Poipet and the emergence of unregulated gambling.”

Star Vegas welcomed 42% fewer customers last year as the pandemic shutdown was accompanied by the closure of the Cambodia-Thailand border, which has yet to reopen. Donaco offered no timeline for when Star Vegas might reopen, saying it would depend on when the pandemic conditions “stabilize.”

Star Vegas also suffered from Donaco’s years-long legal tiff with the property’s former ‘Thai vendors.’ The dispute was finally resolved this spring, and one of these vendors was added to Donaco’s board earlier this month, but the dispute added AU$2m to Donaco’s FY20 expenses.

Cambodia’s 2019 decision to ban online gambling as of January 2020 actually saved Donaco’s bottom line from even further negativity. In FY19, Donaco reported a net loss of AU$3.7m from its nascent online gambling operations, which launched in August 2018 but never really got going before they were forced to shut.

In Vietnam, Donaco’s Aristo International Hotel near China’s southern border reported revenue falling 36.5% to AU$13.7m, while earnings fell by more than half to AU$4.9m and net profit slid 95%. Like Star Vegas, Aristo was forced to shut on April 1 and while it was allowed to reopen on May 8, the border with China remains shut, which has significantly impacted customer visitation.

All this uncertainty means Donaco isn’t offering any guidance for FY21, saying only that it’s doing its best to keep costs to a minimum. Donaco says it’s aiming for a monthly cash burn of US$800k-$900k while its operations remain hobbled.

Donaco is managing this difficult period without a CEO, following the planned exit of ex-chief Paul Arbuckle earlier this month. Donaco said Monday that the search for Arbuckle’s successor “is at final stages with an appointment imminent.”