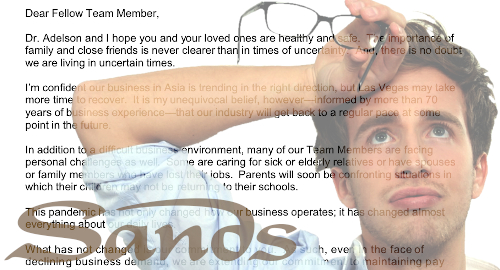 Casino operator Las Vegas Sands has reassured its staff that they will continue to be paid through at least Halloween despite having been furloughed due to COVID-19.

On Wednesday, Sands chairman/CEO Sheldon Adelson issued a letter to the company’s US staff in which he expressed confidence that the company’s Asian casino business was “trending in the right direction,” while acknowledging that operations in Las Vegas “may take more time to recover.”

Adelson’s letter expressed his “unequivocal belief” that the gaming industry “will get back to a regular pace at some point in the future.” COVID-19 has changed “almost everything about our daily lives,” however, Adelson stressed to his staff that “what has not changed is our commitment to you.”

Like all Vegas operators, Sands was forced to suspend operations in March as the pandemic took hold. But as it became clear that the shutdown would last longer than originally anticipated, Adelson announced that his company would be “paying every one of our nearly 10,000 employees as though they were still working.”

While Vegas casinos were allowed to reopen on June 4, restrictions on both gaming capacity and non-gaming amenities, combined with a general skittishness among Americans towards boarding an airplane, have left Vegas casino revenue a pale shadow of the market’s former glories.

Despite these challenges, Adelson said the focus of Sands’ management has been on “the health, safety and livelihood” of rank-and-file staff. As such, Sands was “extending our commitment to maintaining pay and benefits through at least October 31” and would “strive to maintain this support for as long as possible.”

Adelson noted that such largesse made Sands an outlier among US casino operators, many of whom have been somewhat gleefully expressing surprise at how well their venues have managed with skeleton crews during their reopening.

Sands’ generosity comes despite the company having recently reported a nearly $1b net loss in the three months ending June 30. Adelson has long been one of the world’s richest men but, as Sands’ largest shareholder, much of his wealth is tied to the company’s share price, which is currently trading around 38% off its 2020 peak.

Adelson’s longstanding opposition to US online gambling legalization efforts has made him a villain in the eyes of many US gamblers, while his financial support of Donald Trump – as well as his influence on US politics in general – has ruffled feathers far beyond the gaming sector. But you likely won’t find too much criticism coming from the ranks of Sands staffers during this trying time.