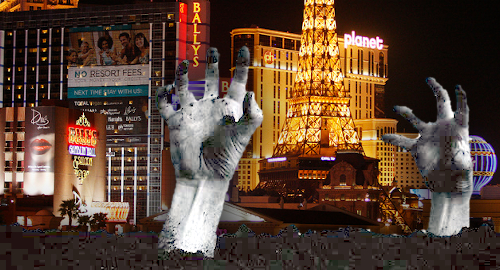 Nevada casino gaming revenue rose significantly from May to June, although the year-on-year comparison is still downright fugly.

Figures released Wednesday by the Nevada Gaming Control Board (NGCB) show the state’s casinos generated gaming revenue of $566.8m in June, a 45.5% fall from the same month last year. However, it’s more than 100 times better than the sum reported in May 2020, the last month in which all venues were shut due to COVID-19.

While casinos may have been allowed to reopen on June 4, they were subject to capacity restrictions as well as being forced to rely on ‘drive-in’ customers from neighboring states as COVID-19 fears continued to deter many customers from further afield from getting on airplanes.

The reliance on customers closer to home was reflected in the regional breakdown, with Las Vegas Strip casino revenue falling 61.4% and Downtown Vegas falling 55.6%, while other Clark County regions suffered far more modest declines. The situation was even better in Washoe County, where Reno’s revenue was down only 8.5% and Sparks slipped only 2.3%.

Over at the sportsbooks, Nevada’s 83-month streak of winning months came to an abrupt end in June as the books reported a $483k loss. The books suffered not only from the pandemic-related suspension of major sports but the long closure of their retail operations, which prevented football bettors from cashing in over $5m in winning tickets until now.

As with other states, the ‘other’ category was left to shoulder the betting burden, despite falling 27.1% year-on-year to just under $3.3m. Baseball ranked second with $1.4m, while no other sport topped the six-figure mark.

June’s $78.2m handle was well below the numbers reported in New Jersey ($165m) and Pennsylvania ($89m), a likely reflection of Nevada’s continued insistence on forcing bettors to register their online betting accounts in person at a local casino (an impossible feat during Nevada’s 89-day closure).

Hopes are high for a stronger overall market rebound in July, as the McCarran International Airport in Las Vegas reported just over 1m passengers in June, down over three-quarters from the same month last year but triple the number of travelers in May.

Meanwhile, the NGCB announced this week that it had opened 156 cases for noncompliance with COVID-19 health and safety protocols. Of these cases, complaints have been filed against the operators of the C.O.D. Casino in Minden, the Bowl Incline in Incline Village and Hotel Nevada & Gambling Hall in Ely.

Nevada Gov. Steve Sisolak ordered the state’s smaller ‘restricted’ gaming licensees to shut down for the second time this month after the state suffered a sudden spike in COVID-19 cases. With a record 21 deaths reported on Wednesday, fears are mounting that Sisolak could extend that order to the major casinos if the state can’t get on top of the situation.