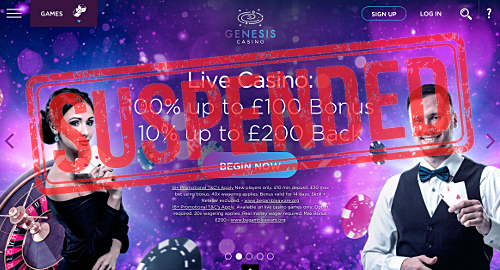 Online gambling operator Genesis Global has had its UK operating license suspended due to “a number of compliance issues.”

On Monday, the UK Gambling Commission (UKGC) announced that it had commenced a review of Genesis Global Ltd’s UK-facing operations under section 116(2)(a) of the Gambling Act 2005, which allows the UKGC to review the operations of any licensee it suspects of being unsuitable to carry on the activities permitted under its license.

The Malta-based Genesis Global also holds licenses issued by the Malta Gaming Authority, while offshoots are licensed by regulators in Spain and Sweden. That latter market has proven tricky for the company, resulting in financial penalties for violating customer bonus offer rules and failing to properly connect its Swedish sites to the country’s online gambling self-exclusion service.

The UKGC has launched a number of similar license reviews in recent months, including Stakers Ltd and FSB Technology, with the latter firm later agreeing to pay £600k for “advertising, money laundering and social responsibility failings” on behalf of three of FSB’s third-party licensees.

The UKGC is currently under a negative spotlight shone by anti-gambling parliamentarians who have repeatedly criticized the regulator as “toothless” and “unfit for purpose” due to its alleged coziness with the companies it oversees. The House of Lords recently called on the UKGC to show “much greater willingness” to revoke the licenses of operators who fail to honor their regulatory obligations.