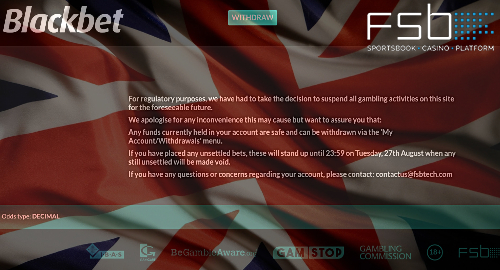 On Thursday, the UK Gambling Commission (UKGC) announced that it had “instigated a review under s116 of the Gambling Act into FSB Technology (UK) Limited.” The UKGC said FSB had “voluntarily suspended activities on its Blackbet website” but that this suspension “will not prevent the operator paying out customers.”

Section 116 of the Gambling Act 2005 authorizes the UKGC to conduct a review if it gets word that a licensee is conducting operations not covered under the scope of its license, or if a licensee has “acquired a conviction” since its license was issued or if the regulator simply suspects that a licensee is “unsuitable” to carry on its licensed activities.

The Blackbet.co.uk home page currently features a notice saying that “for regulatory purposes, we have had to take the decision to suspend all gambling activities on this site for the foreseeable future.” The site apologized for the inconvenience but said withdrawals were still possible and unsettled wagers would stand up until midnight on Tuesday (27), after which unsettled wagers will be made void.

Blackbet made its debut in late-2017, following a somewhat bizarre teaser campaign promising to offer “ethnic sports betting,” which was never really defined before or after the launch. The company’s Nigerian-facing site remains operational at present.

eGaming Review reported that another FSB white-label partner, QuinnBet, was also facing the suspension of its UK-facing operations, reportedly due to ‘concerns over source of funding.’

FSB had been on a roll in July, having secured a £23m investment boost from the Clairvest Group and Clairvest Equity Partners. The extra cash was intended to allow FSB to pursue growth opportunities in regulated sports betting and online gambling markets.