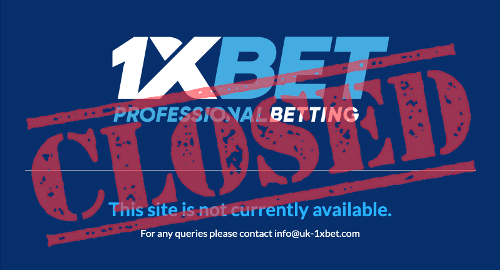 On Sunday, the Times reported that the UK Gambling Commission (UKGC) had launched a probe into the activities of 1xBet, which until this weekend had operated in the UK under a white-label deal with platform provider FSB Tech. Since Friday, the UK-1xbet.com website features only a splash screen stating ‘this site is not currently available.’

FSB says 1xBet’s UK customers needn’t fear for the safety of their account balances, but FSB did say it was reviewing its relationship with 1xBet. FSB added that it had always complied with its own UK regulatory obligations.

The Times probe claimed that some of 1xBet’s operations in other jurisdictions offered betting markets on cockfights and under-19 athletic competitions. 1xBet was also slammed for advertising on video file-sharing sites, which UKGC licensees have been prohibited from doing since 2016.

A 1xBet spokesperson told the Times that its alleged faults were likely the result of “third-party networks or partners.” 1xBet pledged to “immediately” investigate how their ads appeared on “prohibited sites or sites which break the law,” apparently having missed all the recent news reports on the 1xBet logo’s ubiquity on pirate video sites.

1xBet began life as a Russian betting operator but has since launched overseas operations based in Cyprus and licensed in Curacao. These operations recently earned a spot on Russia’s online gambling payment processing blacklist.

1xBet’s UK public profile got a significant boost in recent weeks thanks to signing betting partnerships with three prominent football clubs: Barcelona, Liverpool and Chelsea, adding to the company’s existing deal with Tottenham. The future of these UK deals would now seem to be in serious jeopardy.

UK BOOKIE COMPLAINTS SOAR
The Times’ piece on 1xBet came just days before the BBC’s Panorama program scheduled an episode detailing a surge in customer complaints against gambling operators. Using UKGC data, the program said there were 8,266 complaints filed in 2018 versus just 169 in 2013.

UKGC CEO Neil McArthur told the broadcaster that the surge wasn’t necessarily a wholly bad scenario, because it suggested that “consumers are demanding more of the gambling operators. And I would encourage them to continue to do that.”

The program focused on the experiences of a few individual gamblers, including ‘Amanda,’ who claimed to have lost £633k betting with online operator Jackpotjoy. She also claimed that Jackpotjoy offered her incentives to continue gambling after episodes in which she lost significant sums on the site.

Amanda said Jackpotjoy reps would contact her by phone or email if she’d neglected to gamble for even a single day. She said the company “never questioned whether I could actually afford to spend £50k a night.”

Jackpotjoy told the broadcaster that it was “deeply sympathetic” regarding Amanda’s “unfortunate personal circumstances” but said that it had followed its regulatory requirements regarding social responsibilities, including “the use of deposit limits, cooling-off periods and alternative withdrawal methods; tools which Amanda was aware of and used during the time she played with us.”