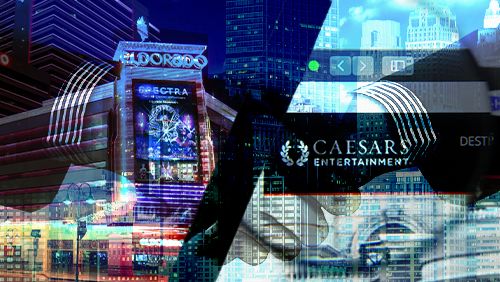 One down, two more to go. Eldorado Resorts and Caesars Entertainment are a step closer to becoming the single largest casino operator in the U.S. after meetings held yesterday in Nevada. The potential merger between the two companies has been waiting on approval in Nevada, New Jersey and Indiana – the last three states on the list – and received the thumbs up by regulators in the Silver State yesterday.

In an announcement made by Eldorado yesterday, it confirmed that both the Nevada Gaming Control Board (NGCB) and the Nevada Gaming Commission (NGC) had said yes to the merger, a decision that didn’t come as a surprise to anyone. It was previously forecast that there would be no more hurdles after the Federal Trade Commission (FTC) gave its approval last month, and the three remaining states to sign off on the deal were thought to have been waiting for that decision before moving forward.

New Jersey is expected to give its position on the merger when regulators meet on July 15. As was the case with Nevada, no major obstacles are expected in the Garden State. Indiana, however, might cause an issue, albeit only a slight one, as some regulators there have already put up a little resistance. They have asserted that there is a lack of horseracing experience, even though Eldorado is behind tracks in Pennsylvania and West Virginia.

Just this week, the Indiana Horse Racing Commission (IHRC) reiterated its concerns, asserting that it cannot give an “enthusiastic or unqualified recommendation” and adding, “Additionally, it is unclear to Commission Staff that [Eldorado] would remain as committed to horse racing if Indiana Grand and/or Hoosier Park are affected by economic downturn or fall short of expected revenues following the table game build-out.”

The IHRC is also concerned about a decision made by Eldorado to unload a couple of Indiana properties – Hoosier Park and Indiana Grand – and sell the real estate assets to real estate investment trust (REIT) VICI Properties. That deal isn’t totally complete yet, but is expected to go through. The commission isn’t overly enthusiastic about a REIT being involved with any of the state’s racetracks, though, and has made its opinion known.

Indiana could prove to be the unlucky horseshoe for the merger, but it ultimately has nothing to gain by trying to stand in the way after all other gaming regulators across the country have said yes. The two companies have independently shown their ability to excel, and can, as one entity, improve their contributions where they conduct business. The Indiana Gaming Commission (IGC) is expected to issue its final decision tomorrow, and the IHRC will weigh in on July 13.