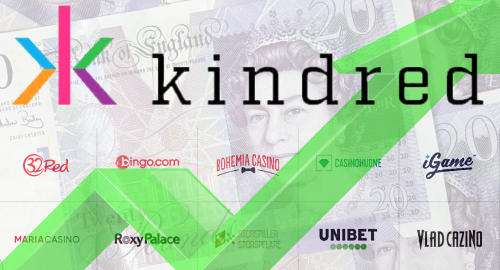 On Wednesday, the Stockholm-listed Kindred Group reported that it expects its revenue for the three months ending June 30 to come in around £235m, up from £226.2m in the same period last year. Kindred will release its official interim report for the second quarter on July 24.

Active customer ranks fell 11% year-on-year to 1.3m in Q2 as sports betting opportunities dried up due to COVID-19 forcing major leagues to suspend operations. But Kindred says “solid growth” from its other gambling products, including eSports and virtual sports, along with the gradual resumption of major sports during the latter stages of the quarter, had “partly compensated” for the sports halt.

Kindred’s release made zero mention of its casino and poker performance, likely due the current media/regulatory focus on whether customers deprived of sports betting were transferring their affections to more ‘risky’ gaming products such as online slots.

Kindred projects its Q2 earnings will rise to a range of £48m-£53m from the £30.5m it earned in Q2 2019. The gains were credited in part to the “cost reduction actions” the company took as the pandemic took hold, including a significant payroll purge. The company reiterated that it intends to continue implementing “operational efficiency initiatives” through year’s end.

Earnings got a further boost from reductions in Kindred’s marketing, content and other direct costs, although the company cautioned that while it was thoroughly enjoying the short-term profit boost, sustained reductions in efforts to pimp its products “could damage the long-term competitive position of the business.”

The lack of major sports events wasn’t entirely problematic, as it reduced the betting duties Kindred owed local governments, with France singled out as having the strongest impact in this area due to the market’s high tax rates.

Kindred’s shares closed Wednesday’s trading up more than 4% to SEK60.52, after briefly flirting with SEK63 earlier in the day. The shares began the year at SEK58.5 but slid to just SEK23 by mid-March as COVID-19 took hold.