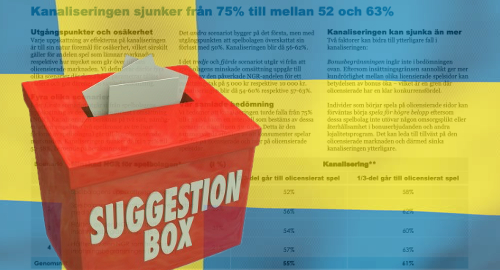 On Monday, Branschföreningen för Onlinespel (BOS), Sweden’s online gambling industry group, offered the government its proposed ‘measures for a safer gambling market,’ seeking to counter the government’s plan to impose strict deposit and spending limits on online casino products as of the first week of July.

BOS recently commissioned a study by Copenhagen Economics to determine what effect the proposed limits will have on ‘channeling’ Swedish gamblers away from internationally licensed gambling sites and toward locally licensed operators.

The report estimated that the online casino channeling rate will likely fall from its current estimate of 72-78% playing with local operators to a range of 52-63%. BOS CEO Gustaf Hoffstedt believes this will put the Swedish market “back to the unsustainable situation” that led the government to launch a regulated online market in January 2019.

BOS has put forth seven alternative steps the government could take to improve the channeling rate and thus allow the state to better monitor gambling activity and protect consumers. These include introducing a B2B licensing system to discourage gaming technology suppliers from doing business with international operators if said suppliers wish to continue doing business with Swedish B2C licensees.

Other suggestions include more funding for campaigns to raise awareness of existing responsible gambling tools, collaboration between government and licensees on analyzing (anonymized) customer data, and using that data to establish a risk classification system based on players rather than gambling products.

On Monday, Svenska Spel CEO Patrik Hofbauer published a statement asking the government to crack the whip against so-called “shadow” operators offering betting markets on lottery draws, which under Swedish law are supposed to be reserved for the state-run Svenska Spel and non-profit groups.

Hofbauer cited an H2 Gambling Capital report that lottery betting sites currently control nearly 40% of Europe’s online lottery market and that these operators’ revenues were growing between 10-20% per year, depriving both the state and the recipients of charitable foundations of badly needed funding.

Hofbauer noted that many of these sites hold Swedish betting licenses, which he claimed they use to “utilize openings” in Swedish gambling laws and corrupt the intentions of the legislators who crafted those laws.

One year ago, Spelinspektionen fined lottery betting operator Lottoland $74k for offering products not covered under its Swedish license, including lottery betting and online scratch cards.

Svenska Spel’s own regulatory compliance is being probed by Sweden’s consumer ombudsman, which recently ordered the company to disclose its relationship with a local TV channel, on which Svenska Spel’s lottery products were being promoted without being labeled as a paid-for promotion and without the required responsible gambling messaging. Svenska Spel is appealing the ruling.