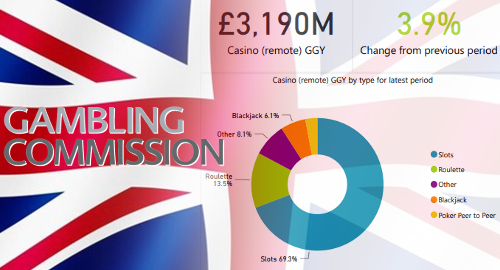 On Thursday, the UKGC released its latest regulated market statistics for the period spanning October 2018 to September 2019, during which overall revenue totaled £14.26b, a 0.5% decline from the most recent report spanning April 2018 to March 2019 (and down even further from £14.5b in the 12 months ending September 2018).

Combined online gambling revenue (excluding online National Lottery sales) hit £5.51b, up from the £5.3b reported in the 12 months ending March 2019, reversing the rare negative growth (-0.6%) recorded in the previous survey.

The shop reduction was a response to the government-ordered reduction in the maximum stake on the shops’ fixed-odds betting terminals (FOBT) on April 1, 2019. The cull also reduced betting shop staff by nearly 4,000, bringing the total number of retail betting employees to 46,123, down from nearly 56k in 2012.

The newly neutered machines appear to have lowered the shops’ over-the-counter (OTC) betting turnover, which fell 5.3% to just under £8b, while on-course racing bookies reported a modest turnover increase. OTC revenue slipped 6% to £1.28b.

Football was the anchor that dragged down the OTC turnover stats, falling 28% from the previous period, while turnover on the greyhounds, horses and numbers were all up modest amounts. OTC football revenue slipped 22.4% to £318.4m while the ponies gained 2.4% to £526.2m and the dogs rose 5.4% to £155.5m.

The average balance of funds held in customers’ online accounts hit an all-time high of just over £900, up from £828 in the previous survey and from less than £500 in 2015.

The UKGC publishes its findings in May and November, and there’s a significant lag between the data and the current date, meaning we will have to wait at least a year before learning the true impact of COVID-19 on the overall market.