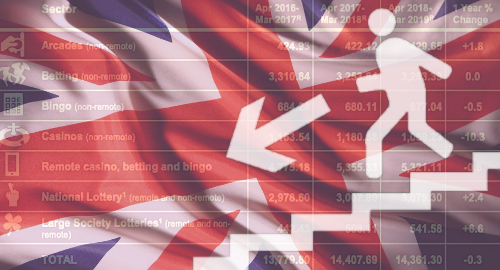 The UK’s online gambling market suffered its first ever revenue decline, with race betting fingered for dragging down the numbers.

The headline takeaway from the UKGC’s latest report is the first recorded decline in online GGY. Online remains the biggest single chunk of the UK gambling market at £5.3b, or 37.1% of the total pie. However, that sum represented a 0.6% year-on-year decline, thanks to sports betting falling nearly 11% to £1.83b despite a 2.7% rise in turnover.

The number of new online account registrations was up around 1m to 33.3m but active accounts fell 9.3% to 31m.

Land-based betting GGY fell less than 1% to £1.42b while turnover rose 2% to £8.91b. Horse and dog racing each reported declines in GGY and turnover, while football saw decent gains in both categories.

This is the final UKGC report prior to the April 1 implementation of the new £2 maximum stake on fixed-odds betting terminals (FOBT) in high street betting shops. Betting shop machine GGY was down less than 1% to £1.83b – although this represented the first machine decline in a decade – thanks to B2 machines falling nearly one-third to £1.16b.

However, betting shops’ B3 machines – which were already limited to £2 stakes – reported GGY more than quadrupling to £670.8m, thanks to what the UKGC called “improvements in the way we collect and report granular data for those cabinets that offer games across multiple categories.”

The number of betting shops fell 3% to 8,320, marking the sixth straight year of real estate shrinkage. This shrinkage is set to accelerate dramatically as betting operators have closed hundreds of shops following April’s FOBT stake decline.