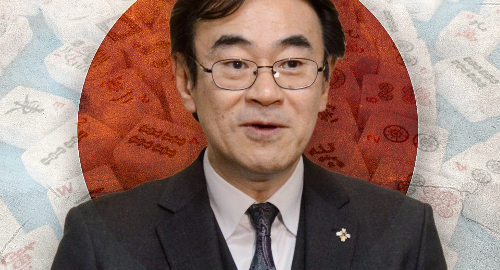 Japan’s casino critics got another shot in the arm this week when a top prosecutor tendered his resignation after defying social distancing requirements to gamble.

On Thursday, Hiromu Kurokawa, chief of the Tokyo High Public Prosecutors Office, asked to be relieved of his duties after reports emerged that he’d disregarded the country’s COVID-19 state of emergency restrictions to play mahjong for money at the home of a local reporter on four separate occasions.

Media reports indicated that Kurokawa (pictured) and the three other players had been holding the mahjong games on a monthly basis for several years. Kurokawa attended the four most recent games despite Tokyo being subject to stay-at-home requirements.

In addition to being Japan’s second-highest-ranking prosecutor, Kurokawa is also reportedly a favorite of Prime Minister Shinzo Abe. In January, Abe’s cabinet allowed Kurokawa to remain on the job despite reaching the mandatory retirement age for prosecutors of 63.

The government then attempted to raise this age to 65, sparking criticism that the cabinet was bending over backward to protect one of Abe’s allies. Abe was reportedly keen to see Kurokawa succeed Japan’s top prosecutor, whose retirement is expected in July.

On Friday, Kurokawa learned he won’t face criminal charges for illegal gambling, getting off with a mere warning, while Abe insisted he didn’t intend to tender his own resignation over the matter. Regardless, the scandal will likely boost the Japanese public’s cynicism about the impact on society from Abe’s protracted push to authorize casino gambling.

Kurokawa’s downfall follows last December’s arrest of one of the key government figures involved in crafting casino policy, allegedly due to questionable payments the legislator received from a would-be casino licensee.

The escapades of public figures aren’t likely to negatively impact the integrated resort licensing process, which was dealt a far bigger blow this month when Las Vegas Sands abruptly withdrew its name from the hunt for one of the three casino permits Japan plans to initially award.